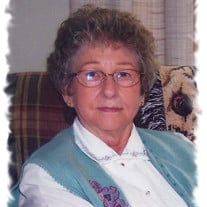 Shirley A. Pritchett, age 71, of Marion, IL passed away at 6:16 a.m. on Tuesday, June 24, 2014, at her home. She was born at home, located in the Lake Creek Township in Williamson County, IL, on Tuesday, December 1, 1942, the daughter of Coy and Cecil (Davis) Anderson. Shirley attended school in Johnston City and was a graduate of Johnston City High School in 1961. She continued her education later in life by attending classes at John A. Logan College of Carterville, IL. She was united in marriage to Paul Pritchett, Jr. on November 30, 1963, at Liberty No. 6 Freewill Baptist Church, located east of Johnston City, IL and together they have shared just over fifty years of marriage. Her working career with the school system started at the Pittsburg School as one of their cooks. Later she became a Media Aid for the Jefferson School in Marion until she transferred to the Longfellow School in Marion as their Media Aid where she remained until her retirement in 1992 after a 23 year career with the schools. Also during her working career in the afternoons she worked with the family business “Poor Boys Mkt.” that was located on East Main Street in Marion. Her church membership was with Liberty No. 6 Freewill Baptist Church east of Johnston City, IL. In her spare time she developed a passion for using the computer for research especially genealogy. Over the years she had extensively researched both the Pritchett and Anderson families. She also enjoyed spending time working in her yard and tending to all her flowers. She always kept busy with work and other interests, but a very important part of her life was family and especially spending time with her grandchildren. The many memories created will now be cherished by those she leaves behind. She is survived by her husband, Paul Pritchett, Jr. of Marion, IL; son and daughter-in-law, Mark and Juli Pritchett of Marion, IL; four grandchildren, Brandon, Blake, Brockton and Brooklyn Pritchett all of Marion, IL; two sisters and brothers-in-law, Mary and Jim Russell of Pittsburg, IL and Norma Jean and Terry Fritts of Harrisburg, IL; two brothers and sisters-in-law, Bill and Paula Anderson and Logan and Anita Anderson all of Pittsburg, IL; two sisters-in-law, Sylvia Anderson of Pittsburg, IL and Donna Jones of Texas, and a host of nieces, nephews, cousins, other extended family and many friends. She was preceded in death by her parents; father-in-law and mother-in-law, Paul and Dorothy Pritchett; daughter, Dianna Marie in 1992; sister, Catherine Courtright and brother, Luther “Dutch” Anderson. Arrangements for Shirley A. Pritchett were entrusted to Wilson-McReynolds Funeral Home 900 N. Court St. Marion, IL. A time of visitation for family and friends was on Thursday, June 26th from 5:00 p.m. until 8:00 p.m. at the funeral home. The funeral service was at 11:00 a.m. on Friday, June 27, 2014, at Wilson-McReynolds Funeral Home with Rev. David Milburn presiding. During the service Rev. Milburn read a special letter written by Shirley’s son, Mark. The prelude musical selections were presented by pianist, Ellen Meece. Special vocal musical selections presented during the service were “One Day at a Time” by Loren Anderson, Ellen Meece and Lora Chamness with pianist, Donna Fowler accompanying and “I’ll Meet You In the Morning” by Loren Anderson, Mike Meece, Ellen Meece, Lora Chamness and David Anderson with pianist, Donna Fowler accompanying. The postlude musical selections were presented by pianist, Donna Fowler. Interment followed in Rose Hill Cemetery of Marion, IL. Pallbearers were Lowell Anderson, John Anderson, Logan Anderson, Ronnie Robinson, Sammie Jones and Jason Rix. Following the committal service at the cemetery the family and friends gathered at Pittsburg Free Will Baptist Church of Pittsburg, IL for a meal and continued time of fellowship and support. For those who preferred, memorial gifts in memory of Shirley A. Pritchett were made to either “Liberty No. 6 Baptist Church” or “Hospice of Southern Illinois”. Memorial contribution envelopes were available at the funeral home or were mailed in care of Wilson-McReynolds Funeral Home, P.O. Box 370, Marion, IL 62959. For additional information please contact the funeral home by calling 618-993-2131.

The family of Shirley A. Pritchett created this Life Tributes page to make it easy to share your memories.

Send flowers to the Pritchett family.