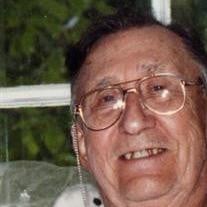 Sidney Samuel Francis, age 98, of Marion, IL, passed away at 3:10 a.m., on Tuesday, November 29, 2011, in the Carbondale Rehabilitation Center of Carbondale, IL. He was the son of Joseph Sidney and Nettie Orene (Boyd) Francis and was born Saturday, November 15, 1913, on the family farm, near Broughton of Saline County, IL. Sidney was united in marriage to Martha Eileen Moore on April 11, 1936, in Eldorado, IL and together they shared over seventy-five years of marriage until her death on September 26, 2011. He answered the call of this nation by enlisting into the United States Army Air Force on December 29, 1942, during the time of WW II, faithfully serving until the time of his honorable discharge on February 18, 1946, with the rank of Corporal. The family moved to Marion in 1947, and he became a member of the First Presbyterian Church of Marion. He also was a life member of the VFW Heyde-Pillow Post No. 1301 of Marion and when his children were young he served as a Boy Scout Leader for 15 years. His working career was with the Veteran’s Hospital for many years until his retirement on December 31, 1974. After retirement, he and Martha spent twenty-five winters in Florida where they enjoyed fishing and frying up their catch. They would always return to Marion, after April 15th. He will be missed by all who knew and loved him. He is survived by two sons and one daughter-in-law, Benny Joe Francis of Winter Park, FL and James Lee and Julie Francis of Herrin, IL, several nieces and nephews, other extended family members, and many friends. He was preceded in death by his parents, wife; infant sister, Alma Francis; brother, Joseph Francis and his daughter-in-law, Elaine Francis. Arrangements for Sidney Samuel Francis were entrusted to the Wilson-McReynolds Funeral Home, 900 N. Court Street, of Marion, IL. A time of visitation for family and friends was from 5:00 p.m. until 7:00 p.m. on Friday, December 2nd, at the funeral home. During the time of visitation a “Reflection of Life” DVD Memorial Tribute featuring special people, places and events of Sidney’s life was presented to the family and friends. The funeral service was on Saturday, December 3, 2011, at 11:00 a.m. at Wilson-McReynolds Funeral Home with Pastor Tim Land presiding. Comments of memory were presented by Sidney’s sons, Benny and James. The prelude and postlude musical selections were recorded piano selections. Special recorded vocal musical selections presented during the service were “Go Rest High on That Mountain” by Vince Gill and “The Old Rugged Cross” and “Amazing Grace” both by Cristy Lane. Following the service military honors were accorded at the funeral home by members of the V.F.W. Heyde-Pillow Post No. 1301, American Legion Post No. 147 and the Illinois National Guard all of Marion, IL. Those participating were Commander, Larry Largent; Chaplain, Dan Fruge; Officer of the Day and Bugler, Bill Deaton; Color Guard, Ralph DeVasier and Jessie James; National Colors, Ernie Rinella; V.F.W. Flag, Ron Ganzer; American Legion Flag, Nate Hopkins and Firing Squad, Don Burgrabe, Wayne O’Conner, Ned Padget, Fred Read, Bill Reynolds, Ron Russell and Jerry Swisher. Members of the Illinois National Guard Flag Detail participating were SGT Dave Kemner and PFC Cory Brinkley. Presentation of the flags to Sidney’s sons, Benny and James was by SGT Dave Kemner. Following the military tribute the family and friends gathered at the Abundant Life Assembly of God Church in Marion, for a meal and continued time of fellowship and support. Interment then followed next to his wife at 2:00 p.m. on Saturday, in Douglass Cemetery near Broughton, IL, in Saline County. Pallbearers were Luther Boggan, Alex Connell, John Boggan, Jim Berkel, Marvin Bonner and Ricky Moore. For those who preferred, memorial contributions were made to “VNA Tip Hospice” or “The American Cancer Society”. Memorial contribution envelopes were available at the funeral home or were mailed in care of Wilson-McReynolds Funeral Home, P.O. Box 370, Marion, IL 62959. For additional information please call the funeral home at 618-993-2131.

Sidney Samuel Francis, age 98, of Marion, IL, passed away at 3:10 a.m., on Tuesday, November 29, 2011, in the Carbondale Rehabilitation Center of Carbondale, IL. He was the son of Joseph Sidney and Nettie Orene (Boyd) Francis and was born Saturday,... View Obituary & Service Information

The family of Sidney Samuel Francis created this Life Tributes page to make it easy to share your memories.

Send flowers to the Francis family.