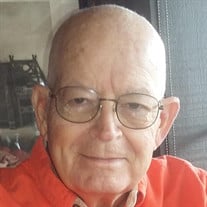 Steve J. MacGregor, 81, of Marion, a former resident of Kinmundy, Decatur and Mattoon, passed away at 12:27 pm on Monday, May 3, 2021 after an extended illness. The son of Walter Allen Duffield & Grace F. Studdard, Steve was born in Northcutt, MO (Washington Co.), had one sister (Judith E. Rost), and three brothers (Eugene F., Walter Van, and Kenneth B. Schroeder). His parents, sister, brothers Eugene and Walter V. all proceeded him in death. His brother Kenneth survives. He married Joyce Mae (Rendleman) Prince in 1964 and they had two daughters, Diana Lynn (Michael Rogers) of Chatham, IL and Susan Renee (Nathan Lange) of Saybrook, IL. He had one grandson, Devan Wachter. They divorced in 1977. He married Debra Ann Venters in March 12, 1982. They all survive him. Steve was an honored Vietnam Air Force Veteran and retired after 30 years of service to the Department of Defense. Steve was a stock broker with A.G. Edwards. He then transitioned to insurance salesman at James Shafer, becoming an agent with State Farm Insurance in Decatur. After this, he moved to Mattoon and became Plant Superintendent at Justrite Manufacturing. Steve was able to participate in the Southern Illinois Honor Flight on 10/01/19 to Washington, D.C. He was a life member of the Veterans of Foreign Wars and a member of the Disabled American Veterans. He loved horses, fishing, hunting and his closest companion, his dog Jake. Steve loved his family, but chose not to have any final services held. There was a small family service held at the VA Medical Center in Marion shortly after his passing. His remains will be cremated. In lieu of memorials or flowers, any tributes may be sent to the CLC Center at the Marion VA Center, 2401 West Main Street in Marion, IL 62959. Arrangements have been entrusted to Wilson-McReynolds Funeral Home of Marion, IL. For additional information call the funeral home at 618-993-2131.

Steve J. MacGregor, 81, of Marion, a former resident of Kinmundy, Decatur and Mattoon, passed away at 12:27 pm on Monday, May 3, 2021 after an extended illness. The son of Walter Allen Duffield & Grace F. Studdard, Steve was born in Northcutt,... View Obituary & Service Information

The family of Steve J. MacGregor created this Life Tributes page to make it easy to share your memories.

Steve J. MacGregor, 81, of Marion, a former resident of Kinmundy,...

Send flowers to the MacGregor family.