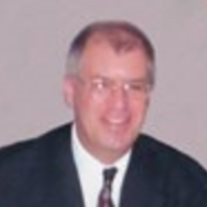 Steven Lee “Putt” Rothschild, age 47, of Marion, IL, passed away peacefully with his family and friends by his side at 5:03 p.m. on Sunday, March 16, 2014, at his home. Steve was born on Wednesday, October 26, 1966, in Marion, IL the son of Charles E. “Gene” and Paula Kay (Groner) Rothschild. He attended school in Marion and was a 1984 graduate of Marion High School. After graduation he went on and attended John A. Logan College of Carterville where he received his Associate Degree in Liberal Arts. After graduation from college he faithfully served in the Army National Guard. Steve’s working career was with United Parcel Service in Marion for twenty nine years where he had many close friends and last worked as a supervisor. He was raised in the Christian faith and was baptized at the West Frankfort Christian Service Camp. He first was a member of Parish Park Christian Church and later became a member of Shiloh Christian Church both of Marion. Family vacations and travel were some of his greatest joys along with buying, repairing and selling old pinball machines and games. Steve enjoyed being outdoors especially deer hunting, fishing and camping. He also enjoyed watching and playing all types of outdoor sports and while attending school in Marion played both football and baseball and baseball for John A. Logan College. Steve was a HUGE St. Louis Cardinal Baseball fan. He had a love for all children, especially his nieces and nephew. Steve always enjoyed the many times all the family would gather together and treasured the many memories that were created. He is survived by his father and mother, Charles E. “Gene” and Paula Kay Rothschild of Marion, IL; brother, Gary Rothschild of Marion, IL; sister-in-law, Rhonda Epperley of Marion, IL; three nieces, Paula Jean Rothschild, Sarah Ann Rothschild and Alexandra Nicole Rothschild and nephew, Axson Jeremiah Rothschild all of Marion, IL, several aunts, uncles, other extended family and many friends. He was preceded in death by his brother, Greg Rothschild, grandparents; uncle and aunt, Bill and Mary Ann Mueller and uncle, Jim Groner. Arrangements for Steven Lee Rothschild were entrusted to the Wilson-McReynolds Funeral Home, 900 N. Court Street, Marion, IL. A time of visitation for family and friends was on Wednesday, March 19th from 5:00 p.m. until 8:00 p.m. at the funeral home. During the time of visitation a “Reflection of Life” DVD Memorial Tribute featuring special people, places and events of Steve’s life was presented to the family and friends. The funeral service was at 1:00 p.m. on Thursday, March 20, 2014, at Wilson-McReynolds Funeral Home with Rev. Leroy R. Waggoner presiding. Comments of memory were presented by Steve’s brother, Gary Rothschild and friend, Joe Pearce. During Joe's comments he led those attending the service singing "Take Me Out to the Ballgame" in memory of Steve and his enthusiasm as a St. Louis Cardinal fan. The prelude and postlude musical selections were recorded piano selections. Special recorded vocal musical selections presented during the service were “Go Rest High on That Mountain” by Vince Gill and “How Great Thou Art” by Elvis Presley. Interment followed in Rose Hill Cemetery of Marion, IL. Active pallbearers were Joe Pearce, Scott Long, Rob Craig, Marc Palmer, Jeremy Hobgood and Jimmy Rhodes. Honorary pallbearers were Vina Ek, Dale Bowers, Doug Deaton, Bradley Mezo, Jr. Mezo, Nick Lay, Scott Rothschild, Scott Mueller, Rodney Tweedy and Scott Pearce. Military honors were accorded at the graveside by members of Heyde-Pillow V.F.W. Post No. 1301, American Legion Post No. 147 and Illinois National Guard Flag Detail all of Marion, IL. Those participating were Commander, Larry Largent; Chaplain, Dan Fruge; Officer of the Day, Pat Campbell; Bugler, Jim Grieme; Color Guard, Jessie James and Bill Rice; National Flag, Ernie Rinella; VFW Flag, Jeff Hoffard; American Legion Flag, Wayne O’Connor and Firing Squad, Don Burgrabe, Ralph DeVasier, Bill Hampsey, Fred Read, Ron Russell, Jerry Swisher and George Trammell. Members of the Illinois National Guard Flag Detail participating in the folding of the flag were SSG Brandon Page and PFC Sean Winemiller. During the folding of the flag the musical selection “America the Beautiful” was presented. Presentation of the folded flag to Steve’s father, Gene was by SSG Brandon Page. Following the committal service at the cemetery the family and friends gathered at Lake of Egypt Christian Church for a meal and continued time of fellowship and support. For those who preferred, memorial gifts in memory of Steven L. Rothschild were made payable to either “Lake of Egypt Christian Church” or “Hospice of Southern Illinois”. Memorial contribution envelopes were available at the funeral home or were mailed in care of Wilson-McReynolds Funeral Home, P.O. Box 370, Marion, IL 62959. For additional information please contact the funeral home by calling 618-993-2131.

The family of Steven Lee "Putt" Rothschild created this Life Tributes page to make it easy to share your memories.