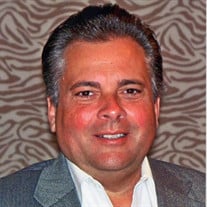 Steven Lynn Ray, age 51, of Marion, IL, passed away at 12:50 p.m. on Monday, September 14, 2015 in Grayville, IL. He was born on Tuesday, October 15, 1963, in Marion, IL the son of Jeff L. and Judith A. (Robertson) Ray. He was of the Protestant faith and loved the Lord with all of his heart and soul. He attended the Bible College of Tulsa, OK and the World Outreach College of Baton Rouge, LA and was an ordained minister doing evangelistic work for fifteen years. Playing music and singing was his passion and he was a graduate of the Recording Workshop of Chillicothe, OH. The many memories that were created will now be cherished by those he leaves behind. He is survived by daughter, Hannah Ray of Broken Arrow, OK; mother, Judi Robertson of Marion, IL; father, Jeff Ray and wife Judy of Marion, IL; two brothers, Tony Ray and wife Mistee and Darren Ray all of Marion, IL; two nieces, Alexis Ray of Crainville, IL and Taylor Ray of Marion, IL and nephew, J. D. Ray of Marion, IL, other extended family members and many friends. He was preceded in death by his grandparents. Arrangements for Steven Lynn Ray were entrusted to Wilson-McReynolds Funeral Home, 900 N. Court St., Marion, IL. The time of the visitation was from 10:00 a.m. to 11:00 a.m. on Wednesday, September 16, 2015, at the First Christian Church-Disciples of Christ, located at 310 North Market St., Marion, IL. Following the time of visitation the funeral service was at 11:00 a.m. with Elder Gary Rothenberger presiding and Pastor Marvaline Cole presented comments of memory. The prelude and postlude were recorded musical selections. Special recorded vocal selections presented during the service were “Place of Worship” by William McDowell and “I Am Not Alone” by Kori Jobe. A special video “The Lion and The Lamb” was presented by the family, written and sang by Steven Ray. Interment was near his grandparents in Rose Hill Cemetery of Marion, IL. For those who preferred, memorial contributions were made to “Wilson-McReynolds Funeral Home” to help with final expenses and mailed in care of Wilson-McReynolds Funeral Home, P.O. Box 370, Marion, IL 62959. Memorial envelopes were available at the funeral home and the church. Following the memorial service the family gathered for a meal and continued time of fellowship and support. For additional information please call the funeral home at 618-993-2131.

The family of Steven Lynn Ray created this Life Tributes page to make it easy to share your memories.

Send flowers to the Ray family.