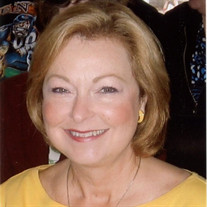 Susan J. Miller, age 64, of Marion, IL, passed away peacefully with her family by her side at 1:08 p.m. (Eastern Time) on Sunday, September 23, 2018, at the Cleveland Clinic in Cleveland, OH. She was born on Monday, August 9, 1954, in Herrin, IL to Sam and Marjorie Jane (Holland) Stotlar. Susan was united in marriage to Brian Miller Saturday, August 14, 1976 and they shared over 42 years of marriage. Susan was a 1972 graduate of Herrin High School, and a 1976 graduate of Eastern Illinois University, Charleston, IL where she received her Bachelor Degree in Vocal Performance and Music Education. She was a member of the Sigma Kappa Sorority. In college she won the title of “Miss Charleston” and was runner-up in the “Miss Illinois” pageant. Music has always been a very important part of her life. Early in her career she performed live on stage at Six Flags Over Texas and Six Flags Over Mid-America in St. Louis, MO. Susan was an award winning choir director at Crockett Jr. High in Irving, Texas. Her husband’s career with Ford Motor Company brought her talents to churches wherever they lived. Since her move back to the area she became a member of The Journey Church of Marion and was a member of P. E.O Chapter MN, in Marion, IL Susan loved spending time with her family, especially her sons their wives and grandchildren. She traveled often to visit her sons and their families. She is survived by her husband, Brian Miller of Marion; two sons and daughters-in-law, Jeffrey and Adrianne Miller of Oakland, MI and Bradley and Krystina Miller of Carbondale, CO; five grandchildren, McKinley, Ryder, Easton and Ellie Jane Miller all of Oakland, MI and Parker Miller of Carbondale, CO; her mother Marjorie J. Stotlar, Marion, brother Rob Stotlar and his wife Kim, Marion and three nephews, Brock Stotlar of St. Louis, MO, Tory Stotlar and his wife Lauren of Creve Coeur, MO and Phillip Hartnett and his wife Sonny of Montgomery, AL; mother-in-law, Nancy Miller of Basalt, CO; two sisters-in-law, Carrie Hartnett and her husband Pat of San Antonio, TX and Ellen Rice and her husband Keith of Basalt, CO. She was preceded in death by her father Sam Stotlar; brother, David Stotlar and father-in-law, Raleigh Miller, Jr. Arrangements were entrusted to Wilson-McReynolds Funeral Home, 900 North Court Street, Marion, IL. The time of visitation was from 11:00 a.m. to 2:00 p.m. on Saturday, September 29, 2018 at The Journey Church, located at 9835 Old Bainbridge Trail in Marion. During the visitation a “Reflection of Life” DVD Memorial Tribute was presented to the family and friends and featured special people, places, and events of Susan’s life. Following the time of visitation the funeral service was at 2:00 p.m. with Pastor Jordan Byrd presiding. The prelude and postlude musical selections were presented by pianist, April Burkhart. Special vocal musical selections presented during the service were “When We All Get to Heaven” and “Alleluia, Sing to Jesus” both presented by Karen Malkovich McClusky accompanied by April Burkhart on the piano. Special recorded vocal musical selection presented during the service was “Set Me as a Seal.” Special comments of memory presented during the service were by Allen Bashour, Nancy Sohn-Simon, Jeffrey Miller, and Bradley Miller. Interment followed in Rose Hill Cemetery of Marion. Those serving as pallbearers were Jeff Miller, Brad Miller, Brock Stotlar, Tory Stotlar, Phillip Hartnett, and Pat Hartnett. A special song was presented at the graveside by the ladies of Sigma Kappa Sorority. Following the graveside committal service at the cemetery, family and friends gathered at Mackie’s Pizza for a meal and continued time of fellowship and support. For those who preferred, memorial contributions were made to “Achroma Corp” a research fund for a rare eye disease, and mailed in care of Wilson-McReynolds Funeral Home, 900 N. Court Street, Marion, IL 62959. Memorial envelopes were available at the funeral home and the church. For those who would like more information, please visit their website at “achromacorp.org”. If making memorial contribution directly online please designate contribution in memory of “Susan J. Miller”. For more information call the funeral home at 618-993-2131.

The family of Susan Jane Miller created this Life Tributes page to make it easy to share your memories.