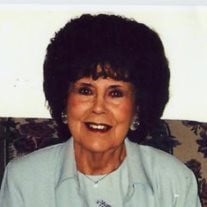 Sybil Gibbons Chamness, age 90, of Marion, IL, passed away peacefully with her family by her side at 11:12 a.m. on Monday, March 24, 2014, at Heartland Regional Medical Center of Marion, IL. She was born on Sunday, March 9, 1924, in Crab Orchard, IL to Earl and Edna (Fry) Gibbons and was the oldest of eight children. Sybil celebrated her 90th birthday on March 9th with most of her family at Giant City Lodge and ice cream and cake at the home of her daughter. She was united in marriage to Ernest “Hal” Chamness on Saturday, November 9, 1940, and together they shared over 56 years of marriage until his passing in 1997. Her working career outside the home was with several area clothing stores; Sherman’s, Anna Lee’s, Teen Fashions and Toppers. Sybil never went anywhere that she did not run into someone she knew or was a relative of in some shape or form. She attended church regularly at East Liberty Christian Church, located south of Marion, and on most days could be found having lunch at the Marion Senior Citizens Center. It was at the Senior Citizens Center that Sybil found her inner musician and joined the Merry Makers Kitchen Band at the age of 87 playing the claves. She was a loving mother of two children, Gary and Sheri, grandmother of five, great grandmother of thirteen and great-great grandmother of two. To say she was loved by many is an understatement. She was not a traditional mother/grandmother who had fresh baked cookies waiting, but a motherly figure that always made the best mashed potatoes and chocolate pies, would swing on the porch with you on a nice day and sip lemonade and always made sure she left an imprint of her lipstick on your cheek as she gave you a big hug and kiss. She is survived by her son and daughter-in-law, Gary and Faye Ellen Chamness of Crab Orchard, IL; daughter and son-in-law, Sheri and Jerry Crouse of Marion, IL; five grandchildren, Mike Chamness and his wife, Lora of Creal Springs, IL, Renee Usher and her husband, Dale of Carterville, IL, Jason Chamness and his wife, Courtney of Creal Springs, IL, Michelle Martin and her husband, Jeff of Marion, IL and Ashleigh Jons and her husband, Justin of Round Rock, TX; thirteen great grandchildren, Alexis Hankey and her husband, Scott, Megan Woods and her husband, Jake, Mikayla and Kristin Chamness, Brody and Bryce Usher, Magi, Ella Kate, Monroe and Steely Chamness, Makenzie and Makenna Martin and Victoria Jons; two great-great grandchildren, Cameron and Brayden Hankey; two sisters, Virginia Powell of Marion, IL and Rosetta Smothers of Marion, IL; brother and sister-in-law, Glen and Sandy Gibbons of Marion, IL; special friend, Jack Muckley, other extended family and many friends. She was preceded in death by her parents, Earl and Edna Gibbons; husband, Ernest “Hal” Chamness and four brothers, Rod, Ray, Bob and Bill Gibbons. Arrangements for Sybil Gibbons Chamness were entrusted to the Wilson-McReynolds Funeral Home, 900 N. Court Street, Marion, IL. The time of visitation for family and friends was on Thursday, March 27, 2014, from 11:00 a.m. until 1:00 p.m. at the funeral home. During the time of visitation a “Reflection of Life” DVD Memorial Tribute featuring special people, places and events of Sybil’s life was presented to the family and friends. Following the time of visitation the funeral service was at 1:00 p.m. with Rev. Ivan Ryan presiding. The prelude and postlude musical selections were recorded piano selections. Special recorded vocal musical selections presented during the service were “Take My Hand, Precious Lord” and “May the Good Lord Bless and Keep You” both by Jim Reeves. Interment followed next to her husband in Simmons Cemetery east of Creal Springs, IL. Pallbearers were Jason Chamness, Glen Gibbons, Jack Smothers, Mike Chamness, Bryce Usher and Dale Usher. Following the committal service at the cemetery the family and friends gathered at Arnold View Free Will Baptist Church for a meal and continued time of fellowship and support. For those who preferred, memorial gifts were made to “Hospice of Southern Illinois”. Memorial contribution envelopes were available at the funeral home or were mailed in care of Wilson-McReynolds Funeral Home, P.O. Box 370, Marion, IL 62959. For additional information please call the funeral home at 618-993-2131.

Sybil Gibbons Chamness, age 90, of Marion, IL, passed away peacefully with her family by her side at 11:12 a.m. on Monday, March 24, 2014, at Heartland Regional Medical Center of Marion, IL. She was born on Sunday, March 9, 1924, in Crab Orchard,... View Obituary & Service Information

The family of Sybil Gibbons Chamness created this Life Tributes page to make it easy to share your memories.

Send flowers to the Chamness family.