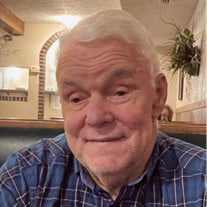 Teddy D. “Teddy Bear” Edds, age 80, of Crab Orchard, IL, passed away peacefully with his family by his side, at 1:06 p.m. on Saturday, September 4, 2021, in the Carrier Mills Nursing and Rehabilitation Center of Carrier Mills, IL. He was born on June 5, 1941, in Sullivan, IN, the son of Russell and Lois G. (Boone) Edds. Teddy attended school in Crab Orchard, IL and was a graduate of Crab Orchard High School Class of 1959. His working career was as a coal miner the majority of his lifetime. He began working for Peabody Coal at their Will Scarlett Strip Mine near Stonefort, IL. He worked there for many years until he transferred to Peabody’s Baldwin Underground Mine near Marissa, IL, to finish his mining career and retired in 2002. After his retirement he enjoyed helping his friends with electrical, plumbing and mechanical projects. He was known in the area as a person that could do just about anything. He was a member of the Church of Christ of Marion and also a member of District 12 UMWA Local Union No. 9939. In his spare time, he enjoyed traveling, going out to eat and riding motorcycles. He owned and rode a Harley Hogg for many years and later a Honda Gold Wing. He enjoyed working and restoring Ford Falcon cars. He was a member of the “Falcon Club” and would travel to car shows displaying his cars. He enjoyed spending time with his family and looked forward to the times they gathered together. The memories created will now be cherished by those he leaves behind. He is survived by his daughter, Teresa Nichols of Harrisburg, IL; son, David Andrew Edds of Stonefort, IL; two grandsons, Derek Morris of Crab Orchard, IL, and Donald Andrew Edds of Stonefort, IL; sister and brother-in-law, Peggy R. and Don Richey of Crab Orchard, IL, several nieces and nephews, other extended family and many friends. He was preceded in death by his parents; brother, Donnie Edds; sister and brother-in-law, Judy and Gordon Holmes; brother-in-law, Danny Richey; sister-in-law, Katherine Parker; nephew, Shannon Richey and niece, Karen Holmes. Arrangements have been entrusted to Wilson-McReynolds Funeral Home, 900 North Court Street, Marion, IL. Due to the executive order by the Governor of Illinois, those attending the visitation and funeral service inside, must wear a face mask and practice social distancing. The visitation will be on Thursday, September 9, 2021, from 11:00 a.m. to 1:00 p.m. at the funeral home. Following the visitation, the funeral service will be at 1:00 p.m. with Minister Gerald Cowan presiding. Interment will follow in Mount Pleasant Shed Cemetery located east of Marion. The family requests for those who prefer, memorial contributions be given to “Mount Pleasant Shed Cemetery.” Memorial contributions may be mailed in care of Wilson-McReynolds Funeral Home, 900 N. Court Street, Marion, IL, 62959. Memorial envelopes will be available at the funeral home. For additional information call the funeral home at 618-993-2131.

The family of Teddy D. "Teddy Bear" Edds created this Life Tributes page to make it easy to share your memories.

Send flowers to the Edds family.