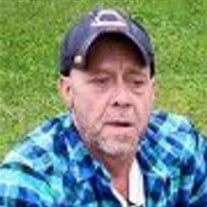 Terry T. Collins, age 51, of Marion, IL, formerly of the Kankakee, IL area, passed away from the results of an automobile pedestrian accident at 11:48 p.m. on Monday, June 1, 2015, in Heartland Regional Medical Center of Marion, IL. He had been living in the Marion area for the last 10 years. He was born in St. Mary’s Hospital in Kankakee, IL on Thursday, August 1, 1963, the son of Cecil Jesse and Marjorie Helen (Gagnon) Collins. Terry’s working career was in construction as a drywall finisher and painter. He was of the Protestant faith and was one that knew the bible. Since being in the Marion area he attended the First Christian Church-Disciples of Christ with his sister, Kathy. In his spare time some of the things he enjoyed were fishing, antiquing, cooking, gardening and exercising. He also volunteered on a regular basis at the Marion Ministerial Alliance and was known for having a “Heart of Gold” and always was willing to help the seniors when he saw a need. He also was an avid Chicago Cubs fan. His family was a very important part of his life and the many memories that have been created will now be cherished by those left behind. He is survived by three sons, James Collins who is currently serving in the US Air Force and stationed in NB, Matthew Collins of Champaign, IL and Samyual Fouse-Collins of Gillman, IL, five grandchildren; two sisters and one brother-in-law, Kathy Collins and Tammy and Jimmy Smith all of Marion, IL; twin brother, Larry Lester Collins of Marion, IL, several nieces and nephews, several great nieces and great nephews, other extended family and many friends. He was preceded in death by his parents and brother, Gary Lee Collins who passed away at the age of 9 in 1973. Arrangements for Terry T. Collins were entrusted to Wilson-McReynolds Funeral Home, 900 N. Court St., Marion, IL. The time of the visitation for family and friends was from 11:00 a.m. to 1:00 p.m. on Saturday, June 6, 2015, at the funeral home. Following the time of visitation the memorial service was at 1:00 p.m. Comments of memory were presented by Terry’s niece, Allison Collins-Giles; brother, Larry Collins and sisters, Kathy Collins and Tammy Smith. Special recorded musical selections presented during the service were “Amazing Grace” by Elvis Presley, “Holes In the Floor of Heaven” by Steve Wariner, “See You Again” by Wiz Khalifa and since Terry was such a huge Cubs fan the service concluded with “Go Cubs Go” by Steve Goodman. Following the service the family and friends gathered at a home at the Lake of Egypt for a meal and continued time of fellowship and support. For those who preferred, memorial contributions were made to Terry’s sister and brother-in-law “Tammy & Jimmy Smith” to help with the final expenses and mailed in care of Wilson-McReynolds Funeral Home, P.O. Box 370, Marion, IL 62959. Memorial contribution envelopes were available at the funeral home. For additional information please contact the funeral home by calling 618-993-2131.

Terry T. Collins, age 51, of Marion, IL, formerly of the Kankakee, IL area, passed away from the results of an automobile pedestrian accident at 11:48 p.m. on Monday, June 1, 2015, in Heartland Regional Medical Center of Marion, IL. He had been... View Obituary & Service Information

The family of Terry Tim Collins created this Life Tributes page to make it easy to share your memories.

Send flowers to the Collins family.