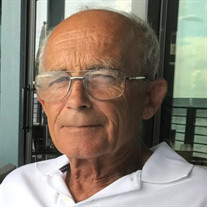 Terry W. Spielman, age 71, of Marion, IL, formerly of Pecatonica, IL and having recently moved to Marion, in August of 2020, from North Fort Myers, Florida, passed away peacefully with his family near, at 10:48 a.m. on Monday, January 31, 2022, at his home. He was born on December 24, 1950, in Rockford, IL, the son of Thomas W. and Dorothy Ruth (Gilliland) Spielman. Terry attended school in Winnebago, IL, and was a graduate of Winnebago High School Class of 1969. Shortly after graduation he answered the call of this nation in August of 1969, enlisting into the United States Navy and after his period of faithful service was honorably discharged with the rank of Aviation Boatswain’s Mate Second Class in July of 1972. He was united in marriage to Eleanor Jean Seitz on June 23, 2002, in Pecatonica, IL, and together they have shared over 19 years of marriage. His working career was diverse over his lifetime. From 1977 to 1981 he worked for the Gunite Division of Kelsey Hayes of Rockford, IL, 1981 to 1983 for Frito-Lay, Inc. of Beloit, WI, 1984 to 1989 for Warner Electric of South Beloit, IL, 1989 to 1996 for Atlas Components of Cherry Valley, IL and finally from 1996 to May of 2017 for the Muller Pinehurst Dairy in Rockford, IL, as one of their supervisors. He was a member of Seward Congregational Church in Seward, IL, and while living in Marion, had been attending at Zion United Church of Christ. In his spare time, he enjoyed being outdoors, fishing, working on the family farm with his father and while living in Florida, helping all his neighbors with their landscaping. He also was an animal lover, especially of dogs, one being his special one he called Peanut. He loved his family and enjoyed the many times they shared together. The many memories created will now be cherished by those he leaves behind. He is survived by his wife, Jeanie Spielman of Marion; mother, Dorothy Spielman of Mount Morris, IL; three children, Kelly Pechlaner and husband, Bernie of Windsor, CO, Jerry Spielman and wife, Leigh of St. Charles, IL and Andy Spielman and wife, IZza of Loves Park, IL; step-son, David Crockett and wife, Courtney of Cincinnati, OH; thirteen grandchildren, Nicholas, Lukas, Tyler and Aiden Pechlaner all of Windsor, CO, Matt Heath of St. Charles, IL, Ryan and Brianna Spielman of St. Charles, IL, Joey Spielman, Lily Spielman and Amber Mendoza all of Loves Park, IL and Luke, Sophie and Brodie Crockett all of Cincinnati, OH; three sisters, Debbie Butts of Winnebago, IL, Brenda Presell and husband, Dan of Mundelein, IL and Elaine Sawdey and husband, Lon of Park Falls, WI; sister-in-law, Sandra Williams and husband, Charles of Carrier Mills, IL; brother-in-law, John Seitz and wife, Susan of South Haven, MI, other extended family and many friends. He was preceded in death by his father. Arrangements are entrusted to Wilson-McReynolds Funeral Home, 900 North Court Street, Marion, IL. A memorial service will be accorded at a later date in Seward, IL. In lieu of flowers, the family has requested for those who prefer, memorial contributions be made to either or both; “Hospice of Southern Illinois” and/or “Seward Congregational Church.” Memorial contributions may be mailed in care of Wilson-McReynolds Funeral Home, 900 N. Court Street, Marion, IL, 62959. For additional information call the funeral home at 618-993-2131.

Terry W. Spielman, age 71, of Marion, IL, formerly of Pecatonica, IL and having recently moved to Marion, in August of 2020, from North Fort Myers, Florida, passed away peacefully with his family near, at 10:48 a.m. on Monday, January 31, 2022,... View Obituary & Service Information

The family of Terry Wayne Spielman created this Life Tributes page to make it easy to share your memories.

Send flowers to the Spielman family.