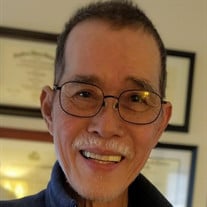 Thang Nang San, age 64, of Marion, IL, passed away peacefully at 12:34 p.m. on Tuesday September 8, 2020, in SSM Health Saint Louis University Hospital. Thang was born on Saturday, April 14, 1956 in Vietnam. He was the oldest of eleven children to Luc A. San and Pac Cong. He was a restaurant owner of 32 years. Most recently, he owned and operated a restaurant in Carterville, IL for more than 18 years. Thang was the epitome of a passionate, firm, strong, and protective husband, father, and grandfather. He was an amazing example of hard work and perseverance. His endurance in the face of struggle was awe-inspiring to those who knew him. He never wavered in his optimism despite great and unrelenting challenges. He will be remembered for his love of his large family and welcoming all into his home. There is nothing he enjoyed more than a big gathering of loved ones, friends and socializing with new people. He was a quick learner, enjoyed watching football, listening to oldies, watching the news, learning about new things and exploring new places, and absolutely adored spending time with his grandson. Thang is survived by his loving wife of 42 years, Mui San; his son, Lee San; his daughter and son-in-law, Jenny San and Lee Tao; his grandson, Elan Tao; his mother, Cong Pac; his mother-in-law, Mui Tsan; his brother and sister-in law, Khuong San and Mui Sam; his sister, Chan San; his sister and brother-in-law, Cam San and Duong Nan Loc; his brother and sister-in-law, Chi San and Ngoc Hoang San; his sister and brother-in-law, Nhuc San and Don Dinh; his sister and brother-in-law, Sau San and Tuan Le; his sister and brother-in-law, Quay San and Jason Sinh; his brother and sister-in-law, Phat Thang San and Thuy San; 20+ nieces and nephews, many other living relatives and friends. The family has been blessed to spend many wonderful years with Thang. He will be missed by many and loved forever. Those he leaves behind will now cherish the memories created over the years. Arrangements have been entrusted to Wilson-McReynolds Funeral Home, 900 N. Court St., Marion. The time of visitation is scheduled from 2:00 p.m. until 4:00 p.m. on Saturday, September 19, 2020, at the funeral home. Following the visitation, a private gathering will be held at the family residence.

The family of Thang Nang San created this Life Tributes page to make it easy to share your memories.

Send flowers to the San family.