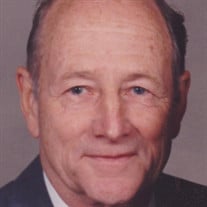 Thomas M. DeVardo, age 92, of Marion, IL, passed away peacefully with his son, Tim by his side, at 5:23 p.m. on Tuesday, October 27, 2020, in the Century Assisted Living Center of Carbondale, IL. He was born on Tuesday, July 3, 1928, in the unincorporated town of Clifford, IL, located north of Colp in Williamson County, the son of Phillip and Mabel (Swinford) DeVardo. Tom attended his elementary education years in the one room school known as North Bend Community School located north of Colp. He then attended high school in Herrin, IL and was a graduate of Herrin High School Class of 1947. After graduation he began working for several years as an Auto Body Repairman for Harold Grob Motors of Murphysboro, IL. He was united in marriage to Elsie Marie Richards on Sunday, February 1, 1948, in Murphysboro, and together they shared over 72 years of marriage until her death on Thursday, June 18, 2020. Tom answered the call of this nation in 1952, by serving in the United States Army during the time of the Korean War. After his period of faithful service he was honorably discharged with the rank of Sergeant in 1954. Returning from the military he began working for the Illinois Central Gulf Railroad as a Rail Tester traveling between Murphysboro and New Orleans. Realizing the railroad job wasn’t for a person with a family, he moved to Marion, and began working for the Fabick Cat Company for 20 plus years. He later began working for the Consolidated Coal Company at their Burning Star Mine No. 5 near Desoto, IL, for approximately 15 years until his retirement around 1990. After his retirement he continued to do welding part time until he was in his early 80’s. Tom was a 50 plus year member of the Warder Street Baptist Church of Marion. He also was a member of the UMWA District 12 Local Union No. 2216 and the International Association of Machinist, a 50 year plus member of the Masonic Lodge, served on the welding committee at John a Logan College for 25 plus years assisting with their welding program and was a volunteer with the Meals on Wheels Program in Marion, for over 25 years. He loved the serving other people when he saw the opportunity. In his spare time he enjoyed fishing, traveling, gardening, spending time in the outdoors, volunteering in the community being of service and visiting the sick and shut-ins. He loved his family and always enjoyed the many times they all shared together. The memories created will now be cherished by those he leaves behind. He is survived by his son and daughter-in-law, Tim and Lorie DeVardo of Marion; two grandsons, Josh A. DeVardo of Marion and Ben S. DeVardo and wife, Erin of Mt. Vernon, IL; great grandson, Colin A. DeVardo of Mt. Vernon; sister, Nadine Battioli of Herrin; two sisters-in-law and brother-in-law, Shirley Oetjen and her husband, Marvin of Carterville, IL and Ruth Ann Richards of Murphysboro, other extended family and many friends. He was preceded in death by his parents, wife; son, John Thomas DeVardo in December of 2001, and sister, Ethel Ross. Arrangements were entrusted to Wilson-McReynolds Funeral Home, 900 N. Court St., Marion. The visitation was from 10:00 a.m. until 11:00 a.m. on Friday, October 30, 2020, at the funeral home. During the time of visitation a “Reflection of Life” DVD Memorial Tribute featuring special people, places and events in Tom’s life was presented to the family and friends. Following the visitation the funeral service was at 11:00 a.m. with Tom’s son, Tim S. DeVardo presiding. The prelude and postlude musical selections were presented by pianist, Terry Ragain. Special vocal musical selections presented during were; “When I Survey the Wondrous Cross” and “It Is Well With My Soul” both by Ferris Trovillion with pianist, Terry Ragain accompanying. Ferris Trovillion also presented the musical selection “Afterglow” a cappella. After the funeral service military honors were accorded at the funeral home by members of the Heyde-Pillow V.F.W. Post No. 1301 of Marion, and members of the United States Army Funeral Honors Burial Detail. During the folding of the flag the recorded musical selection “America the Beautiful” was presented. The folded flag was then presented to Tom’s son, Tim. Interment followed next to his wife in Murdale Gardens of Memory Cemetery located between Carbondale and Murphysboro, IL. For those who preferred, memorial contributions were made to “Marion VFW Ritual Team”. Memorial contributions were mailed in care of Wilson-McReynolds Funeral Home, 900 N. Court Street, Marion, IL 62959. Memorial contribution envelopes were also available at the funeral home. DUE TO HEALTH CONCERNS RELATED TO THE COVID-19 VIRUS AND BY THE SIGNING OF EXECUTIVE ORDER BY THE ILLINOIS GOVERNOR, those attending the visitation or service it was REQUIRED they wear a mask and social distance themselves from others. For additional information call the funeral home at 618-993-2131.

The family of Thomas Marion DeVardo created this Life Tributes page to make it easy to share your memories.

Send flowers to the DeVardo family.