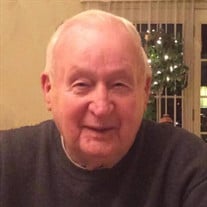 Thomas Lewis, Jr., age 91, of rural Goreville, IL, the Lake of Egypt area, passed away peacefully at 4:40 a.m. on Tuesday, February 2, 2021, in Heartland Regional Medical Center of Marion. He was born on Wednesday, September 11, 1929, in Marion, the son of Tom and Emma (Crabtree) Lewis. Tommie went to school in Marion, and was a graduate of Marion High School Class of 1946. Shortly after graduation he answered the call of this nation and enlisted into the United States Air Force in 1946, the beginning of his long period of serving for the next 26 years. Three years after enlisting into the military, he was united in marriage to Mary Louise Clark on Saturday, January 1, 1949, in the Second Baptist Church of Marion, and together they shared over 66 years of marriage until her death on Sunday, December 20, 2015. Tommie and his wife, Louise and daughter, Renee, traveled the world during his Air Force career living in many different countries including; Thule, Greenland; Aleutian Islands, Alaska; Ben Guerir, Morocco; Ramey AFB, Puerto Rico; Forbes AFB, Kansas; RAF Bentwaters, United Kingdom; Pease AFB, New Hampshire; McChord AFB, Washington; Little Rock AFB, Arkansas; Barksdale AFB, Louisiana and ultimately at Scott AFB, Illinois. Finally after 26 years of faithful service he was honorably discharged in 1973, with the rank of Chief Master Sergeant (the highest enlisted rank possible). After retirement from the military he continued his education receiving his Bachelor’s Degree from Park College and his Masters Degree in Business Management from Webster College both located in St. Louis, MO. Shortly after his discharge in 1973, he began his 20 year career with General Electric of Evindale, Ohio, located near Cincinnati, as a Manager of Group Field Service. At the time of retirement in 1993, he served as Vice President of Group Field Service. Upon retiring he moved back to Southern Illinois and built his home on the Lake of Egypt. He was a member of the McKinney Chapel Baptist Church of the Lake of Egypt where he also served as Treasurer. Some of his other memberships include Masonic Fellowship Lodge No. 89 A.F. & A.M. and the Williamson County Shrine Club both of Marion. In his spare time he enjoyed volunteering with the Goreville Senior Meals Program and served on the Board of Directors of Southern Pride Senior Meal Program of Vienna, IL. He loved his time of retirement and was an avid fisherman, boating and having his family and many friends at the home on the lake. He enjoyed spending time with his family and was always interested in all of their many activities, especially those of his grandchildren and great grandchildren. The many memories created will now be cherished by those he leaves behind. He is survived by his daughter and son-in-law, Renee Lewis-Timm and husband, Don of Broken Arrow, OK; two grandsons, Brandon Timm and his wife, Shrease and Skylar Timm all of Broken Arrow, OK; three great grandchildren, Charlie Timm, Paxton Timm and Tatum Timm all of Broken Arrow, OK, other extended family and many friends. He was preceded in death by his parents, wife; three sisters, Beatrice Watson, Eva Thayer and Carol Sternberg and two brothers, Bruce Lewis and Gene Lewis. Arrangements have been entrusted to Wilson-McReynolds Funeral Home, 900 North Court Street, Marion, IL. The family will have a private “Celebration of Life Service” at his home on the Lake of Egypt. The family has requested for those who prefer, memorial contributions may be made to the organization of your choice "Shriners Hospitals for Children" and/or “St. Jude Children’s Research Hospital”. Memorial contributions may be mailed in care of Wilson-McReynolds Funeral Home, 900 N. Court Street, Marion, IL, 62959. Memorial envelopes will be available at the funeral home. For additional information call the funeral home at 618-993-2131.

Thomas Lewis, Jr., age 91, of rural Goreville, IL, the Lake of Egypt area, passed away peacefully at 4:40 a.m. on Tuesday, February 2, 2021, in Heartland Regional Medical Center of Marion. He was born on Wednesday, September 11, 1929, in Marion,... View Obituary & Service Information

The family of Thomas Lewis Jr. created this Life Tributes page to make it easy to share your memories.

Send flowers to the Lewis family.