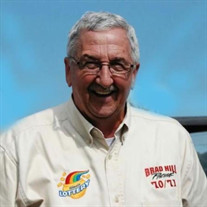 Thomas Eugene Via, age 70, of Herrin, IL passed away at 10:32 am, Thursday, March 3, 2022 at home. He was born on May 5, 1951, in Alton, IL, the son of Leslie and Dorothy (Hurley) Via. Tom grew up in the Eldorado area and was a graduate of Eldorado High School, class of 1969. Tom was in the trucking business for many years and was most recently co-owner of Roof Bolt Transport Inc. of Marion, IL. He was a member of the Raleigh Masonic Lodge and the Williamson County Shrine Club. Tom proudly served for twenty-eight years with the Illinois Army National Guard and retired as Lieutenant Colonel. In his spare time, he enjoyed taking part in Sprint car and Dirt track racing. He was an avid sports fan, and enjoyed cooking for and spending time with his family and friends. Tom loved to read, especially Tom Clancy novels and loved spending time with his family and friends. The memories that have been created will now be cherished by those he leaves behind. He is survived by his two sons, Jason Via and Justin and Michelle Via all of Marion, IL; two grandchildren, Jacob Via and Matthew Via; sister, Pam and Ron Watson of Eldorado, IL; and brother, Leslie “Shorty” Via Jr. and wife Debbie of Ridgway, IL. He was preceded in death by his parents and brother, Dennis Via. Arrangements are entrusted to Wilson-McReynolds Funeral Home, 900 North Court Street, Marion, IL. The visitation will be from 12:00 noon to 3:00 p.m. at the funeral home, with Masonic rights at 1:00 p.m. on Saturday, March 12, 2022, at the funeral home. Following the time of visitation, the funeral service will be at 3:00 p.m. with Rev. Andy Lee presiding. Military honors will be accorded at the funeral home by members of Marion V.F.W. Heyde Pillow Post No. 1301 and members of the United States Army National Guard Funeral Honors Detail. The family has requested for those who prefer, memorial contributions be made to; “Shriners Hospital for Children” and or “St. Jude Children’s Hospital. Memorial contributions may be mailed in care of Wilson-McReynolds Funeral Home, 900 N. Court Street, Marion, IL, 62959. Memorial contribution envelopes will be available at the funeral home. For additional information call the funeral home at 618-993-2131.

The family of Thomas Eugene Via created this Life Tributes page to make it easy to share your memories.

Send flowers to the Via family.