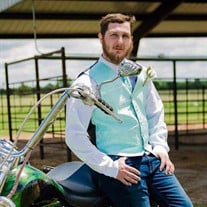 Timothy Ryan “Timmy” Schneider, age 27, of Springfield, MO, formerly of Marion, IL, passed away at 4:57 a.m. on Tuesday, July 6, 2021, at his home. He was born on Friday, July 1, 1994, in Largo, Florida. He was united in marriage to Rachel Medina on Sunday, May 19, 2019, in Bolivar, MO, and together they have been blessed with 2 children, Macey and Rickardo. Timmy’s working career currently was with SRC Remanufacturing Company of Springfield, MO, where they re-manufactured engines and related components. He was of the Baptist faith. In his spare time, he enjoyed working on and riding motorcycles, especially Harley Davidsons. He always could be found in his garage working on a project. He was an outdoor person, and enjoyed camping, fishing, hunting and shooting his guns. Every weekend he and his family could be found at a state park, on the river or lake. He was a very caring person and enjoyed being around his family and many friends. He is survived by his wife, Rachel Schneider of Springfield, MO; two children, Macey and Rickardo Schneider at home; his furry baby dog, Angel a Pitbull and Italian Shepard; father and step-mother, Peter A. and Rhonda Schneider, Sr. of Pinckneyville, IL; paternal grandfather, William A. Schneider of Palm Harbor, FL; paternal grandmother and step-grandfather, Linda and Robert Bain of Palm Harbor, FL; step-paternal grandmother, Donna Moore of Pinckneyville, IL; step-father-in-law and mother-in-law, Michael and Linda Meller of Marion, IL; special uncle-in-law, Carlos Medina of Chicago, IL; three sisters-in-law, Felicia Choate and husband, Roddy of Orient, IL, Tabitha Meller and Tiffany Meller both of Marion, IL; brother-in-law, Michael Meller, Jr. of Marion, IL; paternal grandparents-in-law, Vicente and Elisa Medina of Mexico, a large host of aunts and uncles, other extended family members and many friends. He was preceded in death by his sister, Keira Hamrick; brother, Peter Alan Schneider, Jr. and father-in-law, Rickardo Medina, Sr. Arrangements have been entrusted to Wilson-McReynolds Funeral Home, 900 North Court Street, Marion, IL. The visitation will be on Tuesday, July 13th, from 5:00 p.m. to 8:00 p.m. at the funeral home. The funeral service will be on Wednesday, July 14, 2021, at 11:00 a.m. at Wilson-McReynolds Funeral Home with members of the family presiding. Interment will follow next to his brother Petey, in Cana Cemetery north of Goreville, IL. The family requests any memorial contributions be made to “Wilson-McReynolds Funeral Home” to help with final expenses. Memorial contributions may be mailed in care of Wilson-McReynolds Funeral Home, 900 N. Court Street, Marion, IL, 62959. Memorial envelopes will be available at the funeral home. For additional information call the funeral home at 618-993-2131.

The family of Timothy Ryan "Timmy" Schneider created this Life Tributes page to make it easy to share your memories.