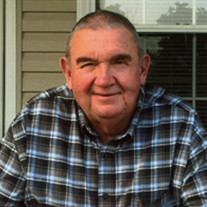 Tommie Lee “Booger” Garrett, age 76, of Marion, IL, passed away peacefully at 5:05 p.m. on Friday, July 9, 2021, in Herrin Hospital of Herrin, IL. He was born on Monday, December 4, 1944, at home in rural Marion, the son of William “Bill” and Helen (Dempsey) Garrett. Tommie was united in marriage to Sally Ann Smith in the First Baptist Church of Marion, on Saturday, May 5, 1979, and together they shared over 40 years of marriage until her death on Thursday, July 18, 2019. His working career was as a Coal Miner working at the Inland Steel Coal Mine that later became Consol Coal Mine near Sesser, IL. He worked as a miner for over 20 years, and was known at the mine by the miner nickname of “Booger”. In the early 1990’s he was injured and had to retire. He was of the Pentecostal faith and faithfully attended at Trinity Pentecostal Tabernacle of Jonesboro, IL. He also was a member of the United Mine Workers of America Local Union No. 1545 of District No. 12. Tommie loved the outdoors and was an avid hunter; especially waterfowl hunting for 50 years at the Marion City Lake, he also enjoyed deer and turkey hunting, fishing, gardening and working around his home in the country. His family was a very important part of his life and was always interested in all the activities in their lives, especially those of his grandchildren. The many times shared together as a family and all the memories that were created will now be cherished by those he leaves behind. He is survived by his son and daughter-in-law, Andrew S. “Andy” and Rachel Garrett and their children, Drew, Lily, Libbie and Drake all of Marion; son, Daniel Garrett and his daughter Destanie Garrett; two brothers-in-law, Tom Smith and his wife, Veronica of Booneville, IN and Jim Little of Marion, a host of nieces and nephews, other extended family and many friends. He was preceded in death by his parents, wife; daughter, Dixie Garrett; two sisters, Delores Emery and Janet Little and brother, Jimmie Garrett. Arrangements were entrusted to Wilson-McReynolds Funeral Home, 900 North Court Street, Marion, IL. The visitation was on Thursday, July 15, 2021, from 10:00 a.m. to 1:00 p.m. at the funeral home. During the time of visitation, a “Reflection of Life” DVD Memorial Tribute featuring special people, places and events in Tommie’s life was presented to the family and friends. Following the time of visitation, the funeral service was at 1:00 p.m. with Pastor Geoff Bond and Rev. Timothy Schlag presiding. The prelude and postlude musical selections were presented by pianist, Glenda Bond. Special vocal musical selections presented during the service were “When They Ring Those Golden Bells”, “Old Time Religion” and “What a Day That Will Be” all by Jane Ann Schlag and Jamie Helton with pianist, Glenda Bond accompanying. Interment followed next to his wife, Sally in Maplewood Cemetery of Marion. Pallbearers were Andrew Garrett, Drew Garrett, Cole Moss, Paul Bush, Ryan Helton, Luke Helton, Bob Brown and Greg Little. Grandson, Drake Garrett served as Honorary Pallbearer. At the graveside Glenda Bond led the congregation in singing “Amazing Grace”. The family requested for those who prefer, memorial contributions be given to “Trinity Pentecostal Tabernacle” and/or “St. Jude Children’s Research Hospital.” For additional information please call the funeral home at 618-993-2131.

The family of Tommie Lee "Booger" Garrett created this Life Tributes page to make it easy to share your memories.