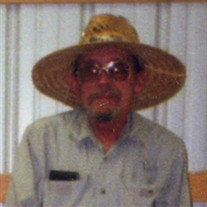 Tommy L. “Rabbit” Bundren, age 61, of rural Creal Springs, IL passed away peacefully with his family by his side at 10:30 a.m. on Monday, July 14, 2014, at his home. He was born on Saturday, February 7, 1953, in Carbondale, IL the son of Ernest Vernell and Anna Mae (Davis) Bundren. Tommy attended school in Marion and was a graduate of Marion High School. After graduation, he answered the call of this nation by serving stateside in the United States Army during the time of the Vietnam War in the early 1970’s. After his period of faithful service he was honorably discharged. He was united in marriage to Sheila R. Marks on Friday, March 19, 1976, in Creal Springs, IL and together they have shared the last thirty-eight years of marriage. Tommy’s working career was mainly in road construction as a laborer being called for work from the Laborers’ Local Union No. 773 of Marion. He was a member of Fairview Baptist Church of Creal Springs, IL and also a member of the V.F.W. Post No. 9763 of Creal Springs, IL. Tommy loved the outdoors and spent much of his time outside at his home gardening and hauling and splitting wood. He loved his large family and always enjoyed the many gatherings they would have. The many memories that have been created will now be cherished by those he now leaves behind. He is survived by his wife, Sheila R. Marks of Creal Springs, IL; daughter, Shelly L. Bundren and her companion, Mark Kelton both of Ozark, IL; son, Ernest V. Bundren of Creal Springs, IL; four grandchildren, Samantha D. Bocook, Dylan M. Bocook and Wyatt D. Pace all at home of Ozark, IL and Emily F. Bundren of Creal Springs, IL; two sisters and brothers-in-law, Phyllis J. and Ray E. Odum and Barbara A. and Jerry Pappas all of Creal Springs, IL; two brothers and one sister-in-law, Randell L. and Jackie Bundren of Creal Springs, IL and Lindell R. Bundren of Benton, IL, several nieces and nephews, other extended family and many friends. He was preceded in death by his parents. Arrangements for Tommy L. “Rabbit” Bundren were entrusted to the Wilson-McReynolds Funeral Home, 900 N. Court Street, of Marion, IL. The time of visitation was from 11:00 a.m. until 2:00 p.m. on Thursday, July 17, 2014 at Fairview Baptist Church, located north of Creal Springs, IL on Saraville Road. Following the time of visitation the funeral service was at 2:00 p.m. with Pastor Ken Sharp presiding. The prelude and postlude musical selections were presented by pianist, Lori Creamer. Special recorded vocal musical selections presented during the service were “Take It Easy” by The Eagles, “Why Me Lord” by Johnny Cash and “Peace In the Valley” by Loretta Lynn. Interment followed in Drake Cemetery southeast of Creal Springs, IL. Pallbearers were Mark Kelton, Jason Pappas, Anthony Pappas, Dave Robinson, Paul Wyant and Brad Bundren. Following the committal service at the cemetery the family and friends gathered back at Fairview Baptist Church for a meal and continued time of fellowship and support. For those who preferred, memorial contributions were made to Tommy’s wife, “Sheila Bundren”. Memorial contribution envelopes were available at the funeral home and the church or were mailed in care of Wilson-McReynolds Funeral Home, P.O. Box 370, Marion, IL, 62959. For additional information please contact the funeral home by calling 618-993-2131.

The family of Tommy L. "Rabbit" Bundren created this Life Tributes page to make it easy to share your memories.