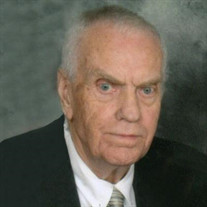 Travis Samuel Collier, age 87, of Carterville, IL, passed away peacefully in Parkway Manor of Marion, IL at 4:09 p.m. on Monday, January 4, 2016. He was born on Monday, February 20, 1928 in Clarksville, TN, the son of William and Drusilla (Tittle) Collier. Travis answered the call of this nation by serving in the United States Army during the time of the Korean War from 1950 until the time of his honorable discharge in August of 1952, with the rank of Corporal. He was awarded the Korean Service Medal with Bronze Star, the Army Occupation Medal and the United Nations Service Medal for his service. Following his discharge, he was united in marriage to Marzella McQuary on Saturday, September 27, 1952, in St. Louis, MO and together they have shared over 63 years of marriage. Travis was a self taught Tool & Die Maker, being able to envision and build almost anything. He worked as a salesman for United Systems Auditing in California until he retired. He was a member of the Victory Baptist Church of Carterville. Travis was interested in the activities of his family, always encouraging them in their many activities and enjoyed their times together. Those memories will now be cherished by those he leaves behind. He is survived by his wife, Virginia Marzella Collier of Carterville; son and daughter-in-law, Kevin and Andra Collier; sister, Ruth and Chester Gross of Houston, TX; two sisters-in-law, Murlene Shaw of Fairview Heights, IL and Sharlene Nadler of Union, MO, other extended family and many friends. He was preceded in death by his parents, two brothers, Grady and Carlos and three sisters Nola, Eva and Margie. rrangements for Travis Samuel Collier were entrusted to Wilson-McReynolds Funeral Home, 900 N. Court St., Marion, IL. The visitation was from 12:00 p.m. until 1:00 p.m. on Friday, January 8, 2016 at the funeral home. During the time of visitation a “Reflection of Life” DVD Memorial Tribute featuring special people, places and events of Travis’ life was presented to the family and friends. Following the time of visitation the funeral service was at 1:00 p.m. with Pastor Glen Aulgur presiding. Comments of memory and prayer were presented by Travis’ former pastor, Pastor Rick Dawson. The prelude and postlude musical selections were presented by pianist Julie Aulgur. Special vocal musical selections presented during the service were “Old Rugged Cross” and “Amazing Grace” both by Rick Parks with pianist Julie Aulgur accompanying. Interment followed in Willowrest Cemetery of Carterville, IL. Pallbearers were David Dawson, David Shaw, Seth Willms, Rich Dawson, Jeff Rushing and Tony Edmonds. Military honors were accorded at the graveside by members of Heyde-Pillow V.F.W. Post No. 1301, American Legion Post No. 147 both of Marion and the Illinois National Guard Funeral Honors Burial Detail of Marion. Those participating were Commander, Larry Largent; Chaplain, Ron Ganzer; National Colors, Bob Casey; Firing Squad, Don Burgrabe, Gene Broombaugh, Bill Hatfield, Ron Russell and Jerry Swisher. Members participating from the Illinois National Guard Funeral Honors Burial Detail of Marion were SPC William Ott and SPC Erik Clapper. During the folding of the flag the recorded musical selection “America the Beautiful” was presented. Presentation of the flag to Travis’ wife, Marzella was by SPC William Ott. For those who preferred, memorial contributions were made to the “Victory Baptist Church” and mailed in care of Wilson-McReynolds Funeral Home, P.O. Box 370, Marion, IL 62959. Memorial envelopes were available at the funeral home. For additional information please call the funeral home at 618-993-2131.

Travis Samuel Collier, age 87, of Carterville, IL, passed away peacefully in Parkway Manor of Marion, IL at 4:09 p.m. on Monday, January 4, 2016. He was born on Monday, February 20, 1928 in Clarksville, TN, the son of William and Drusilla (Tittle)... View Obituary & Service Information

The family of Travis Samuel Collier created this Life Tributes page to make it easy to share your memories.

Send flowers to the Collier family.