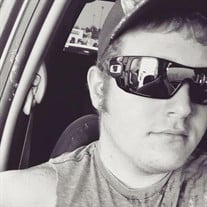 Tyler Dean Rath, age 20, of Marion, IL, passed away at 11:30 p.m. on Tuesday, December 8, 2015, as the result of a mining accident near Macedonia in Franklin County, IL. He was born on Saturday, January 7, 1995, in Carbondale, IL, the son of Robert J. and Jeri (Killman) Rath. He grew up and had many friends in Crab Orchard and Creal Springs, IL. Tyler and Alisha Ann (Jones) Rath have shared the past five years together and were united in marriage on Wednesday, July 1, 2015 in Marion, IL. He was an employee of the M-Class Coal Mine near Macedonia, IL where he was a Long Wall tractor operator. He loved his job and working with his co-workers. In his spare time he enjoyed hunting, spending time in the outdoors, riding 4 wheelers and beefing up his truck. He was always goofing off and enjoyed making people laugh. Most importantly he loved spending time with his wife Alisha, his children and his many friends. Tyler will be missed by all who knew and loved him. He is survived by his wife, Alisha Ann Rath of Marion, IL; daughter, Lilly Skye Rath and son, Adam Noel Rath both at home in Marion; mother and stepfather, Jeri and Duke Rothe of Troy, IL; father and stepmother, Robert J. and Lori Rath of Creal Springs, IL; brother and sister-in-law, Nicholas and Mikeala Rath of Lillington, NC; maternal grandparents, Roger and Mary Killman of Marion, IL, paternal grandmother, Phyllis Rath of Marion, IL; paternal grandfather, Howard Rath and wife Ellen of Elkville, IL; biological paternal grandmother, Kay Russo of St. Louis, MO; several aunts, uncles, cousins, other extended family, many friends and co-workers who he especially enjoyed working with. Arrangements for Tyler Dean Rath were entrusted to Wilson-McReynolds Funeral Home, 900 N. Court St., Marion, IL. The time of the visitation was from 11:00 a.m. to 2:00 p.m. on Sunday, December 13, 2015, at the funeral home. During the time of visitation a “Reflection of Life” DVD Memorial Tribute featuring special people, places and events of Tyler’s life was presented to the family and friends. Following the time of visitation the funeral service was at 2:00 p.m. with Rev. Melody Vogler presiding. The prelude and postlude musical selections were recorded piano selections. Special recorded vocal musical selections presented during the service were “Dirt” by Florida Georgia Line, “See You Again” by Wiz Khalifa, “When I Get Where I’m Going” by Brad Paisley and Dolly Parton and “I Saw God Today” by George Strait. Interment followed in Cana Cemetery north of Goreville, IL. Pallbearers were Zac Pineda, Nicholas Rath, Pety Schneider, T.J. Dodd, Zach Colson and Tyler Purnell. For those who preferred, memorial contributions were made to “Alisha A. Rath” for the children’s educational fund and mailed in care of Wilson-McReynolds Funeral Home, P.O. Box 370, Marion, IL 62959. Memorial envelopes were available at the funeral home. Tyler’s family had a gathering for close friends and family at the VFW in Marion with food and refreshments directly after the service. For additional information please contact the funeral home by calling 618-993-2131.

The family of Tyler Dean Rath created this Life Tributes page to make it easy to share your memories.

Send flowers to the Rath family.