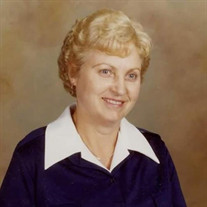 Velma Marie Albright Hottes, age 91, passed away peacefully at 9:30 a.m. on Friday, February 26, 2016, in the Gassville Nursing Center of Gassville, AR. She was born in Energy, IL, on Wednesday, July 23, 1924, the daughter of Everett and Gladys (Lewis) Albright. Velma grew up Southern Illinois and was united in marriage to Walter Jacob Hottes, on Sunday, October 17, 1943, in Mayfield, KY and together they shared over forty-six years of marriage until his death on Monday, August 13, 1990. They lived in Southern Illinois until 1957, when they moved to Mt. Prospect, IL until retirement in 1970, and then moved to Mountain Home, AR. She is survived by her two sons, Ronald Warren Hottes and wife Dawn and Walter Franklin Hottes and wife Lori. Velma has five grandchildren; Julie Hottes Pumfrey and husband Ron, Jill Hottes Wright and husband David, Jake Hottes, Heidi Hottes Arenivas and husband Fabian, and Tabatha Hottes Malave and husband Felix, eleven great grandchildren; four sisters and three brothers-in-law, Ina Mae and Lawrence Fosse, Betty Sullivan, Venetta and Harold Maze and Lois and Clyde Brewer all of Goreville, IL, other extended family members and many friends. She was preceded in death by her husband and sister Louise Pritchett. Arrangements for Velma Marie Albright Hottes were entrusted to Wilson-McReynolds Funeral Home, 900 N. Court St., Marion, IL. The funeral service was at McKinney Chapel Church on McKinney Chapel Road of the Lake of Egypt south of Marion, IL on Tuesday, March 1, 2016 at 11:00 a.m. with Rev. Kenneth Blumenstock presiding. Those attending the service gathered for the service prior to 11:00 a.m. The prelude and postlude musical selections were presented by pianist, Shawn Maze. Special vocal musical selections presented were “God On the Mountain”, “Sheltered In The Arms of God” & “I Won’t Have to Worry Anymore” all by Shawn Maze who accompanied himself on the piano. Following the service, interment followed next to her husband in McKinney Chapel Cemetery next to the church. Pallbearers were Dallas Maze, Stacy Sullivan, Shane Maze, Chris Brewer, Mike Pritchett and Jake Hottes. A reception for the family and friends followed the committal service in the church reception hall. For additional information please contact the funeral home by calling 618-993-2131.

Velma Marie Albright Hottes, age 91, passed away peacefully at 9:30 a.m. on Friday, February 26, 2016, in the Gassville Nursing Center of Gassville, AR. She was born in Energy, IL, on Wednesday, July 23, 1924, the daughter of Everett and Gladys... View Obituary & Service Information

The family of Velma Marie Albright Hottes created this Life Tributes page to make it easy to share your memories.

Send flowers to the Hottes family.