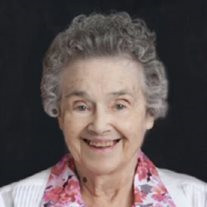 Venita N. Miller, age 94, of Marion, IL, passed away peacefully with her family by her side at 7:45 p.m. on Saturday, February 8, 2014, in Herrin Hospital of Herrin, IL. She was born on Thursday, July 31, 1919, at home located west of Marion, IL in the current Ordill area, the daughter of Joseph Elmer and Zella Mae (Compton) White. Venita attended school in Marion and was a graduate of Marion High School in 1938. After graduation she went on and attended Southern Illinois University in Carbondale and received her teaching certificate. After graduation she began her elementary teaching career in the one room schools of the area including Cherry Valley, Thorn Thicket, Lamaster and Bainbridge. She later began teaching the first and second grades at Crab Orchard Grade School and remained teaching there for many years until her retirement in 1983. Venita was united in marriage to John K. Miller on Saturday, July 19, 1941, in Jackson, MO and together they shared over 52 years of marriage until his death on October 25, 1993. She was a long time member of the First Christian Church-Disciples of Christ of Marion. She also was involved in the Guild Group of the Christian Women’s Fellowship of the church and the Marion Lioness Club for many years. In her spare time she enjoyed reading and spending time with her family and keeping up on all the many activities they were involved with. The many memories that have been created will now be cherished by those she leaves behind. She is survived by her daughter and son-in-law, Melinda and Jerry Jean of Marion, IL; granddaughter, Shari Gamble and her husband, Scott of Marion, IL; grandson, John Rudolph of Paducah, KY; four great grandchildren, Morgan and Landon Gamble both of Marion, IL and Austin and Alexis Rudolph both of Metropolis, IL; sister, Faye Mazzara of Springfield, IL, other extended family and many good friends. She was preceded in death by her parents, husband and her daughter, Anita Kay Miller on February 12, 1965. Arrangements for Venita N. Miller were entrusted to Wilson-McReynolds Funeral Home, 900 N. Court St., Marion, IL. The visitation for the family and friends was on Monday, February 10th from 4:00 p.m. to 7:00 p.m. at the funeral home. The funeral service was at 11:00 a.m. on Tuesday, February 11, 2014, at Wilson-McReynolds Funeral Home with Rev. Jason Jean presiding. The prelude and postlude musical selections were presented by pianist, Lori Creamer. Special vocal musical selections presented during the service were “Amazing Grace”, “In the Garden” and “It Is Well With My Soul” all by Lori Creamer who accompanied herself on the piano. Interment followed next to her husband in Rose Hill Cemetery of Marion, IL. Pallbearers were Larry Marks, Byron Marks, Scott Gamble, Eddie Minton, Gary Jean and Morgan Gamble. For those who preferred, memorial contributions were made to either “The Coach Kill Cancer Fund” or “Hospice of Southern Illinois”. Memorial contribution envelopes were available at the funeral home or were mailed in care of Wilson-McReynolds Funeral Home, P.O. Box 370, Marion, IL 62959. For additional information please call the funeral home by calling 618-993-2131.

The family of Venita Nadine Miller created this Life Tributes page to make it easy to share your memories.