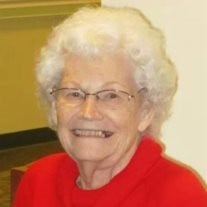 Vida L. Boyd, age 89, of Marion, IL, passed away peacefully with her daughters by her side at 10:10 p.m. on Wednesday, January 29, 2014, in the River to River Community of Marion, located east of Marion, IL. She was born on Saturday, March 15, 1924, in rural Johnson County, IL, near the McKinney Chapel Church, northeast of Goreville, the daughter of Harvey Silvester and Ida (Ollis) Burns. Her working career was with the Tempo Store of Marion, IL as a clerk and later worked at Marion Memorial Hospital for many years. She was the last surviving charter member of First Apostolic Church of Marion, IL. In her spare time she enjoyed reading her Bible and working word find books. She also found great enjoyment spending time with her family and keeping up on all the many activities they were involved with. The many memories that have been created will now be cherished by those she leaves behind. She is survived by two daughter and sons-in-law, LaDonna “Sue” and Clyde Arnold of Iuka, IL and Darla “Jeannie” and Bruce Lowe of Marion, IL; four grandsons, Jeff Arnold and his wife, Anita of O’Fallon, IL, Jason Arnold of Iuka, IL, Justin Lowe and his wife, Kari of O’Fallon, MO and Jonathan Lowe and his wife, Debby of Puyallup, WA; six great grandchildren, Aviana Arnold, Zane Arnold, Gracelyn Lowe, Macyn Lowe, Shaelyn Lowe and Gage Lowe; sister, Imogene Moss of Marion, IL, other extended family and many good friends. She was preceded in death by her parents; three sisters, Lola Burns, Bertha Holderfield and Allene Burroughs and two brothers, Loy Burns and Ernie Burns. Arrangements for Vida L. Boyd were entrusted to Wilson-McReynolds Funeral Home, 900 N. Court St., Marion, IL. The visitation for the family and friends was from 11:00 a.m. to 2:00 p.m. on Saturday, February 1, 2014, at the funeral home. During the time of visitation a “Reflection of Life” DVD Memorial Tribute featuring special people, places and events of Vida’s life was presented to the family and friends. Following the time of visitation the funeral service was at 2:00 p.m. with Rev. Ronald G. Walls and Rev. Steve Miller presiding. The prelude and postlude musical selections were presented by pianist, Randy Cluster. Special vocal musical selections presented during the service were “What a Friend We Have In Jesus” and “That’s What Heaven Means to Me” both by the trio of Bonnie and Ronnie Ollis and Mark Patterson and accompanied by pianist, Randy Cluster, “The Anchor Holds” by Mark Patterson with recorded accompaniment and “Just Be There” as a recorded selection by Karen Wheaton. Interment followed in McKinney Chapel Cemetery of Williamson County, IL near the Lake of Egypt. Pallbearers were Justin Lowe, Jeff Arnold, Jason Arnold, Rick Moss, Roger Burroughs and Mark Patterson. After the committal service at the cemetery the family and friends gathered at the First Apostolic Church Family Center for a meal and continued time of fellowship and support. For those who preferred, memorial contributions were made to either “The First Apostolic Church” or “Hospice of Southern Illinois”. Memorial contribution envelopes were available at the funeral home or were mailed in care of Wilson-McReynolds Funeral Home, P.O. Box 370, Marion, IL 62959. For additional information please contact the funeral home by calling 618-993-2131.

Vida L. Boyd, age 89, of Marion, IL, passed away peacefully with her daughters by her side at 10:10 p.m. on Wednesday, January 29, 2014, in the River to River Community of Marion, located east of Marion, IL. She was born on Saturday, March 15,... View Obituary & Service Information

The family of Vida L. Boyd created this Life Tributes page to make it easy to share your memories.

Send flowers to the Boyd family.