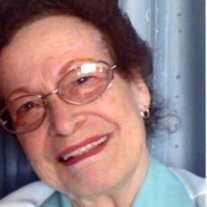 Vida Mae Boyt, age 84, of Carterville, IL, passed away at 8:57 p.m., Saturday, June 15, 2013, in Heartland Regional Medical Center of Marion, IL. Vida was born in a small house in Herrin IL, on Tuesday, December 4, 1928, the daughter of Ray and Faye (Perry) Walker. During the depression and war years of the late 30’s and early 40’s she attended school in South Bend, Indiana. She then moved back to Southern Illinois and has resided in Marion, Metropolis, Brookport and Carterville until her death. She was united in marriage to Blanchard Jones in March of 1948, and they had three sons before his untimely passing in 1955. Vida later was united in marriage to Jack Boyt in August of 1963 and was happily married for next 38 years until his death. After raising her boys, Vida went back to school at Shawnee Community College and proudly became an LPN and worked in hospitals and nursing homes until her retirement. Shaped by a depression, a world war and personal loss, Vida was to her family a truly unique combination of strength of character and the compassion needed to be the matriarch of her family. She is survived by her sons and daughters-in-law, Gary Jones and wife Tammy of Carterville, IL, David Jones and wife, Angie of Overland Park, KS, and Steve Jones and wife, Norma of West Frankfort, IL; affectionately known as “Meme” to her six grandchildren, Savana Jones, Emily Adkinson, Heather Slover, Erica Rigdon, Tonya Wyciskalla, and Chris Eaton; her ten great grandchildren Josey and Gracey Slover, Olivia and Page Rigdon, Mickey, Jessica, Nickolas, and Joseph Wyciskalla and Sofia and Isaac Eaton. She is also survived by her two step sons, Bill Boyt of Colorado Springs, CO and Charles Boyt of Huntington, West Virginia. She was preceded in death by both of her husbands, Blanchard Jones and Jack Boyt; parents, Faye and Dave Soos; grandparents, Dora and Emmitt Perry and two step children, Bob Boyt and Shirley Davis. Arrangements for Vida Mae Boyt were entrusted to Wilson-McReynolds Funeral Home, 900 N. Court St., Marion IL. The time of visitation for family and friends was on Wednesday, June 19th, from 5:00 p.m. until 8:00 p.m. at the funeral home. During the time of visitation a “Reflection of Life” DVD Memorial Tribute featuring special people, places and events of Vida’s life was presented to the family and friends. The funeral service was at 2:00 p.m. on Thursday, June 20, 2013, at Wilson-McReynolds Funeral Home with Rev. Rick Pierce presiding. Comments of memory were presented by Vida’s granddaughter, Savana Jones and Vida’s son, Gary Jones. The prelude and postlude musical selections were recorded piano selections. Special musical selections presented during the service were “Let It Be” as a recorded instrumental guitar selection by Vida’s son, Steve; “Wind Beneath My Wings” as a recorded vocal selection by Vida’s son, Gary and “Never Alone” as a recorded vocal selection by Vida’s granddaughter, Savana. Interment followed in Maplewood Cemetery of Marion IL. Pallbearers were Gary Jones, David Jones, Steve Jones, Chris Eaton, Mike Slover and Gene Hudgens. Following the committal service at the cemetery the family and friends gathered at the home of Gary & Tammy Jones in Carterville, for a meal and continued time of fellowship and support. For those who preferred, memorial contributions were made to the “Juvenile Diabetes Research Foundation”. Memorial contribution envelopes were available at the funeral home or were mailed in care of Wilson-McReynolds Funeral Home, P.O. Box 370, Marion IL, 62959. For additional information please contact the funeral home by calling 618-993-2131.

The family of Vida Mae Boyt created this Life Tributes page to make it easy to share your memories.

Send flowers to the Boyt family.