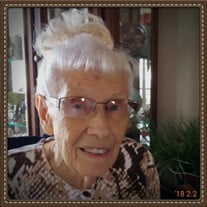 Violet Imogene Moss, age 95, of Marion, IL, passed away peacefully with her family by her side at 10:00 a.m. on Tuesday, February 27, 2018, at the home of her son Rick, in Daytona Beach, FL. She was born on Tuesday, July 4, 1922 in rural Johnson County, IL, near the McKinney Chapel Church, northeast of Goreville, the daughter of Harvey Sylvester and Ida (Ollis) Burns. She was united in marriage to Albert A. Moss on July 12, 1941 in Jackson, MO, and together they shared over sixty years of marriage until his death on Friday, November 2, 2001. She was a member the First Apostolic Church of Marion for many years. She was a loving wife and mother and enjoyed caring for her family and her home. She found great enjoyment spending time with her family and keeping up on all of their many activities. The many memories that have been created will now be cherished by those she leaves behind. She is survived by her son and daughter-in-law, Rick and Cheryl Moss of Marion, IL and Daytona Beach, FL; three grandsons, Christopher Moss and wife Stacy of Columbus, OH, J. C. Richey and wife Sara of Herrin, IL, and Michael Smothers and wife, Hannah of Marion, IL; great-grandchildren, Cody Moss of Columbus, OH, Jace Smothers, and Harper Smothers both of Marion; her little girls, Chloe and Izzy Moss, her 4 paws grandchildren; several nieces and nephews, other extended family, and many good friends. She was preceded in death by her parents; husband; four sisters, Lola Burns, Bertha Holderfield, Allene Burroughs, and Vida Boyd, and two brothers, Loy Burns and Ernie Burns. Arrangements for Imogene Moss were entrusted to Wilson-McReynolds Funeral Home, 900 N. Court St., Marion, IL. The visitation for the family and friends was from 11:00 a.m. to 2:00 p.m. on Monday, March 5, 2018, at the funeral home. During the visitation a “Reflection of Life” DVD Memorial Tribute was presented to the family and friends and featured special people, places, and events of Imogene’s life. Following the time of visitation, the funeral service was at 2:00 p.m. with Rev. Ronald G. Walls presiding. The prelude and postlude musical selections were recorded piano selections. Special vocal musical selections presented during the service were “Take My Hand, Precious Lord” by Jeff Loring with a recorded accompaniment and “Going Home” by Stacy Moss with a recorded accompaniment. Interment followed in McKinney Chapel Cemetery of Williamson County, IL near the Lake of Egypt. Those serving as pallbearers were Jeff Loring, J.C. Richey, Chris Moss, Michael Smothers, Scott Patterson, and Dudley Cantrel. Following the graveside committal service family and friends gathered at the First Apostolic Church for a meal and continued time of fellowship and support. For those who preferred, memorial contributions were made to either or both “American Cancer Society” or “Crittergal Rescue”. Memorial contribution envelopes were available at the funeral home or may be mailed in care of Wilson-McReynolds Funeral Home, 900 North Court Street, Marion, IL 62959. For additional information call the funeral home at 618-993-2131.

The family of Violet Imogene Moss created this Life Tributes page to make it easy to share your memories.

Send flowers to the Moss family.