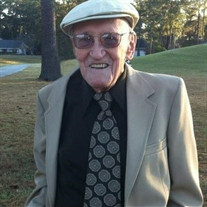 Virgil L. “Zig” Clendenin, age 93, lifelong resident of Marion, IL passed away peacefully after a short illness, at 4:09 a.m. on Monday, February 15, 2016, in Heartland Regional Medical Center of Marion, IL. He was born on Wednesday, June 21, 1922, in Marion the son of Ephram and Dovie Ann (Bundrin) Clendenin. Virgil was united in marriage to Ludean Arvetta Whitehead on Wednesday, October 4, 1944, in Cape Girardeau, MO and together they shared nearly 51 years of marriage until her death on Sunday, April 16, 1995. His working career began with Sagamo Electric for several years. Later he worked for American Magnetics of Carterville, IL and later for National Transformer of Johnston City, IL until his retirement in 1981. After his retirement he kept very active up to two weeks ago. He also was a former member of the Eagles Aerie No. 2457 of Marion for many years. In his spare time he enjoyed walking, dancing on the weekends at the Eagles, traveling, attending at the Senior Circle and the Marion Senior Citizens, playing cards and spending time with his family. The many memories that have been created will now be cherished by those he leaves behind. He is survived by two daughters and sons-in-law, Cheryl and Michael Sullivan of Carriere, MS and Vicki and David Waller of Marion; three grandchildren, Robin Jourdan and her husband Keith of Slidell, LA, Shannon Cobb and his wife Jennifer of Carrollton, TX and Shawna Waller Morris and her husband Bryan of Indianapolis, IN; three great grandchildren, Ashley Huben and her husband Jeff of Austin, TX, Joseph Corona of New Orleans, LA and Nora Cobb of Carrollton, TX; great-great grandson, Jameson Huben of Austin, TX, many nieces and nephews, other extended family and many friends. He was preceded in death by his parents, wife; five sisters, Lily Evetts, Ruth Harper, Della Emery, Nellie Emery and Grace Troxel; three brothers, Lee, Matthew and William Clendenin and a special friend Gladys Walker, who passed away on the same day. Arrangements for Virgil L. “Zig” Clendenin were entrusted to Wilson-McReynolds Funeral Home, 900 N. Court St., Marion, IL. The visitation was from 12:00 p.m. until 2:00 p.m. on Wednesday, February 17, 2016, at the funeral home. Following the time of visitation the funeral service was at 2:00 p.m. with Rev. William Rucker presiding. The prelude and postlude musical selections were recorded country musical selections. Special vocal musical selections presented during the service were “Amazing Grace” by Alan Jackson, “Go Rest High On That Mountain” by Vince Gill, “One Day at a Time” by Cristy Lane & “Precious Memories” by Alan Jackson. Interment followed next to his wife in Lakeview Cemetery of Johnston City, IL. Pallbearers were Michael Sullivan, John Jones, Steven Hudson, David Waller, Shannon Cobb and Perry Austin. Following the committal service the family gathered at Virgil’s home for a meal and continued time of fellowship and support. For those who preferred, memorial contributions were made to either “St. Jude Children’s Hospital” or “St. Francis Care”, a no-kill animal shelter in Murphysboro, and mailed in care of Wilson-McReynolds Funeral Home, P.O. Box 370, Marion, IL 62959. Memorial envelopes were available at the funeral home. For additional information please call the funeral home at 618-993-2131.

The family of Virgil L. "Zig" Clendenin created this Life Tributes page to make it easy to share your memories.