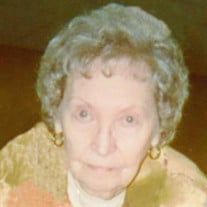 Virginia “Ginny” D. Evans, age 92, of Morganfield, KY passed away peacefully at 7:30 p.m. on Friday, January 5, 2018, in the Breckinridge Place Retirement Community of Morganfield, KY. Ginny, as she was known, was born at home on Tuesday, May 26, 1925, near Reed, KY the daughter of Walter and Ruby D. (Willingham) Duncan. She was once united in marriage to George Earl Evans, Jr. and this union was blessed with two children, Ron and Brenda. Ginny’s working career began in a defense factory during WW II as a riveter working on airplanes. After the war she spent many years working in various retail stores in Evansville, IN. Her last job was with Camp Breckenridge in Morganfield, KY until she retired. She was an avid bingo player and enjoyed playing weekly. She is survived by her daughter and son-in-law, Brenda Evans Banach and her husband Greg Banach of Townsend, GA; son and daughter-in-law, Ron and Judy Evans of Marion, IL, four grandchildren, seven great grandchildren; two sisters and one brother-in-law, Lydia and L.H. Wright and Rose Bickett all of Morganfield, KY, other extended family and many friends. She was preceded in death by her parents and two brothers, William and Glenn Duncan. Arrangements have been entrusted to Wilson-McReynolds Funeral Home, 900 North Court Street, Marion, IL 62959. The visitation will be from 10:00 a.m. until 11:00 a.m. on Monday, January 8, 2018, at Whitsell Funeral Home, 250 N. Court St., Morganfield, KY. Following the time of visitation the funeral service will be at 11:00 a.m. with Rev. Brad Tucker presiding. Interment will follow in Smith Mills Cemetery, located near Smith Mills, KY in Henderson County. For additional information call the funeral home at 618-993-2131.

The family of Virginia "Ginny" Doris Evans created this Life Tributes page to make it easy to share your memories.

Send flowers to the Evans family.