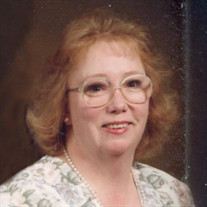 Virginia Louise Harris, age 63, of Marion, IL passed away at Heartland Regional Medical Center in Marion, IL, on Thursday, January 7, 2021 at 10:10 a.m. She was born on Wednesday, October 2, 1957, in Marion, the daughter of Rhyburn Vernell and Hannah Irene (Jack) Holderfield. Virginia attended school in Marion, and was a graduate of Marion High School Class of 1975. She was united in marriage to Ernest Harris on Sunday, November 21, 1976 and together they have shared 44 years of marriage. For most of her adult life, she worked with the public, having various jobs at Heartland Hospital, Ron’s One Stop and H&R Block, and Wendy’s until her retirement in 2017. Virginia loved crafts and yard sales. She was a proud member of Second Baptist Church in Marion, IL and enjoyed her many years teaching Sunday School. She loved watching The Andy Griffith Show, Wheel of Fortune and Dancing with the Stars with her husband. She was funny and always had a joke to tell to make someone laugh. She is survived by her husband, Ernest Harris of Marion, IL; son, Steve Harris of Marion, IL; grandson, Christian Harris was the apple of her eye, of Marion, IL; sister, Pattie and her husband Mark Kellums of Goreville, IL; brother, Gene and his wife Billie Holderfield of Carrier Mills, IL; sister-in-law, Gloria Marshall of Peoria, IL; several nieces and nephews, extended family and many friends. She was preceded in death by her parents, grandparents, two brothers, Vernell and David Holderfield, aunts and uncles. Arrangements were entrusted to Wilson-McReynolds Funeral Home, 900 N. Court St., Marion. The visitation was on Tuesday, January 12, 2021, from 12:00 p.m. to 2:00 p.m. at the funeral home. Following the time of visitation the funeral service was at 2:00 p.m. with Dr. Bob Wagner presiding. The prelude and postlude musical selections were recorded piano selections. Special recorded vocal musical selections presented during the service were; “O Holy Night” by Carrie Underwood, “Go Rest High on That Mountain” by Vince Gill and “When We All Get to Heaven” by Alan Jackson. Interment followed in McKinney Chapel Cemetery near the Lake of Egypt, IL. Pallbearers were Mark Kellums, Gene Holderfield, Shawn Holderfield, Josh Hubbard and Steve Harris. For those who preferred, memorial contributions were made to "Wilson-McReynolds Funeral Home" to help with final expenses. Memorial contributions may be mailed in care of Wilson-McReynolds Funeral Home, 900 N. Court Street, Marion, IL, 62959. Memorial contribution envelopes were available at the funeral home. For additional information call the funeral home at 618-993-2131.

Virginia Louise Harris, age 63, of Marion, IL passed away at Heartland Regional Medical Center in Marion, IL, on Thursday, January 7, 2021 at 10:10 a.m. She was born on Wednesday, October 2, 1957, in Marion, the daughter of Rhyburn Vernell... View Obituary & Service Information

The family of Virginia Louise Harris created this Life Tributes page to make it easy to share your memories.

Virginia Louise Harris, age 63, of Marion, IL passed away at...

Send flowers to the Harris family.