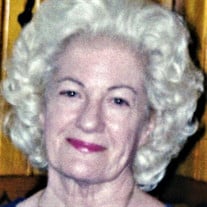 Vivian Ruth Ham, age 89, of Marion, IL, passed away peacefully at 8:50 a.m. on Saturday, September 26, 2020, in Herrin Hospital of Herrin, IL. She was born in Marion, IL, on Sunday, January 11, 1931, the daughter of James and Nellie (Romans) Boles and has been a lifelong resident of Southern Illinois. Vivian was united in marriage to William “Bill” Joseph Ham, Sr. on Thursday, December 24, 1953, in Marion, and together they shared nearly 60 years of marriage until his death on Wednesday, June 12, 2013. She was a loving mother and proud homemaker. She enjoyed the outdoors, walking and flower gardening. Vivian was happiest, when she was in the company of her children and family. She survived by her sons William (Billy) J. Ham, Jr. (Pam) of Marion, and David R. Ham (Renee Anderson) of Milwaukee, WI, her grandson Robert “Rob” J. Ham of Marion and sisters Sybil Paul of Elementary, TN and Wanda Reilly of Los Angeles, CA. She is further survived by her loving nieces, other extended family and many friends. She is preceded in death by her husband, William (Bill) J. Ham, Sr., and brother, Harvey Boles. A celebration of Vivian’s life will be held at a later date. Arrangements were entrusted to Wilson-McReynolds Funeral Home, 900 N. Court St., Marion. For additional information please call 618-993-2131.

The family of Vivian Ruth Ham created this Life Tributes page to make it easy to share your memories.

Send flowers to the Ham family.