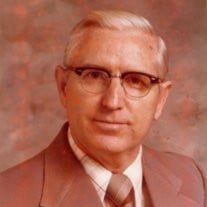 Wallace Lee “Pete” Peebles, age 87, of Marion, IL, passed away peacefully surrounded by his family at 3:45 p.m., on Tuesday, May 14, 2013, at his home. He was born on Tuesday, September 22, 1925, in Pittsburg, IL the son of Walter and Elizabeth (Marks) Peebles. Wallace attended school in Pittsburg, IL and was a graduate of Marion High School in 1943. After his graduation he was inducted into the United States Air Force during WW II and was a crew member on a B-29 Bomber. He served in the Pacific Theater and was stationed at an air base on the Island of Tinian in the South Pacific. He was injured in service and was a recipient of the Purple Heart. After his period of faithful service he was honorably discharged. After returning home, Wallace attended Southern Illinois University of Carbondale, IL where he earned a Bachelor’s Degree and Master’s Degree in Elementary Education. He was first employed by the Community Unit School District #2 as a teacher at the Marion Junior High School. He also coached the Seventh Grade Basketball Team. He later served as Principal at the former Washington and Lincoln Schools. After a long career in education he retired from the School District in 1982. He was united in marriage to Wilma F. Simmons on Saturday, August 18, 1951, at the Community of Christ Church in Marion and together they have shared nearly sixty-two years of marriage. Wallace was a member of the Community of Christ Church in Marion. He was ordained to the Priesthood as an Elder and in the past years has served as pastor for the Marion and Tunnel Hill Community of Christ congregations. He enjoyed studying the scriptures, had a deep love for the Lord and was dedicated to his Faith. He also enjoyed writing from his scriptural studies and composing poetry. He loved his family and will be missed by all. He is survived by his wife, Wilma F. Peebles of Marion, IL; son, Paul Peebles of Redding, CA; daughter and son-in-law, Beth and Alan Asp of Herrin, IL; two sisters-in-law, Alice Jewell of Overland Park, KS and Eva Lee Greeney of Creal Springs, IL; brother-in-law, Gene Simmons of Venice, FL, many nieces, nephews other extended family and many friends. He was preceded in death by his parents; two brothers, William Glenn “Dick” Peebles and Ford Peebles and two sisters, Gladys Hendrickson and Ruth Ferenchek. Arrangements for Wallace Lee “Pete” Peebles have been entrusted to Wilson-McReynolds Funeral Home, 900 N. Court St., Marion, IL. The visitation for the family and friends will be from 10:00 a.m. until 12:00 noon on Saturday, May 18, 2013, at the funeral home. Following the time of visitation the funeral service will be at 12:00 noon, with Richard Switzer and Earl Smith presiding. Interment will follow in Rose Hill Cemetery of Marion, IL. For those who prefer, memorial contributions may be made to either “Hospice of Southern Illinois”, “Community of Christ Church” or “The National Ataxia Foundation”. Memorial contribution envelopes will be available at the funeral home or may be mailed in care of Wilson-McReynolds Funeral Home, P.O. Box 370, Marion, IL, 62959. For additional information please contact the funeral home by calling 618-993-2131.

The family of Wallace Lee "Pete" Peebles created this Life Tributes page to make it easy to share your memories.