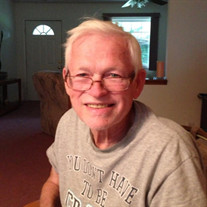 Walter Owen Clark, age 79, of Mulkeytown, IL, passed away peacefully surrounded by his family, at 3:00 a.m. on Wednesday, September 11, 2019, at his home. He was born on Sunday, July 7, 1940, in Grubbs, Arkansas, the son of James Homer and Susie Jane (Davis) Clark. Walter was united in marriage to Lois Ann Blumenstock on Wednesday, May 10, 1967, in Phoenix, AZ, and together they have shared over 52 years of marriage. His working career was as a Meat Cutter all of his lifetime having worked at many of the area’s Kroger Stores including Marion, Carbondale, Fairfield, Harrisburg, DuQuoin and Murphysboro, IL until his retirement. He was a member of the UFCW International Union. Walter had a beautiful voice loved to sing and dance. He once was on Dick Clark’s American Bandstand Show. When not working he loved to be home spending time with many children and enjoyed teaching and playing many different games with them. He loved all of his family and was always willing to help them when he could. He enjoyed spending time together and was always interested in all of their many activities. The many memories that have been created will now be cherished by those he leaves behind. He is survived by his wife, Lois Ann Clark of Mulkeytown; son, Hugh Clark of Phoenix, AZ; daughter and son-in-law, Dinah and Vern Bates of Mulkeytown; daughter and son-in-law, Michele and Tim Rogers of Marion, IL; son, Michael Clark of Richmond, KY; son, Frank Clark of Marion, IL; daughter, Crystal Clark of Carbondale, IL and daughter, Sari Zavala of Marshalltown, IA; grandchildren, David Dixon of Mt. Vernon, IL, Lisa Clem and husband Roger of West Frankfort, IL, Daniel Dixon of Mulkeytown, Susan Mendoza of Marion, Elizabeth Fritz and husband Christopher of Marion, Deborah Loucks of Benton, IL; Camery Odell Clark George and husband Joshua of Sesser, IL; Rachel Clark of Marion, William Harmanson and wife Grace of Richmond, KY, Joshua Owens-Park and wife Whitney of Richmond, KY, Kazandra Clark of Richmond, KY, Hallie Clark of Marion, Izac Clark and Jaden Clark both of Carbondale, and Jose Zavala, Miguel Zavala and Isabel Zavala all of Marshalltown, IA; great-grandchildren, Bailey, Damien, Lauren, Kenzi and Axl Clem all of West Frankfort, Hunter Fritz, Juaquin, Xander and Liam and Diana Mendoza all of Marion, Averie and Kolten Fritz both of Marion, Mattie Loucks of Benton, Ian Asa, Logan George and Lilly George all of Sesser, Josiah Harmanson of Richmond, KY and Elisha Owens-Park of Richmond, KY; three sisters and two brother-in-laws, Maudie and Cal Henkins of Hampstead, NC, Audie Knolls of Phoenix, AZ and Mary Elizabeth and Volney Williams of Castel Rock, CO; two brothers-in-laws, John Blumenstock and wife Jean of Houston, TX and Paul Blumenstock and wife Cindy of Desoto, IL; sister-in-law, Pamela Austin of Carbondale, IL, other extended family and many friends. He was preceded in death by his parents; six sisters, Pearl, Willie, Bessie, Annabel, May and Ruth and four brothers, Charley, Harley, James and Jesse. Arrangements were entrusted to Wilson-McReynolds Funeral Home, 900 N. Court St., Marion. The time of visitation was on Saturday, September 14, 2019, between the hours of 11:00 a.m. and 1:00 p.m. at the funeral home. Following the time of visitation the funeral service was at 1:00 p.m. with Tony Leone presiding. Comments of memory were by his daughter, Dinah Bates and granddaughter, Susan Mendoza. The prelude and postlude musical selections were recorded piano selections. Special recorded vocal musical selection presented during the service were “Daddy’s Hands” by Holly Dunn, “You Needed Me” by Anne Murray and “Go Rest High On That Mountain” by Vince Gill. Pallbearers were Vern Bates, Christopher Fritz, William Hermanson, Timothy Rogers, Daniel Dixon and Hunter Fritz. Interment followed at 1:00 p.m. on Sunday, September 22, 2019, in Rose Hill Cemetery in Marion, IL. For those who preferred, memorial contributions were made to “The American Cancer Society” and may be mailed in care of Wilson-McReynolds Funeral Home, 900 N. Court Street, Marion, IL 62959. Memorial envelopes were available at the funeral home. For additional information please call the funeral home at 618-993-2131.

Walter Owen Clark, age 79, of Mulkeytown, IL, passed away peacefully surrounded by his family, at 3:00 a.m. on Wednesday, September 11, 2019, at his home. He was born on Sunday, July 7, 1940, in Grubbs, Arkansas, the son of James Homer and Susie... View Obituary & Service Information

The family of Walter Owen Clark created this Life Tributes page to make it easy to share your memories.

Send flowers to the Clark family.