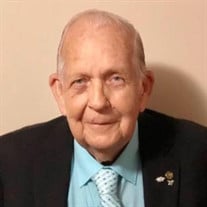 Leroy Sager, age 89, of Marion, IL, passed away peacefully at 12:45 p.m. on Wednesday, June 16, 2021, in Integrity Healthcare Center of Marion. He was born on Friday, October 30, 1931, in Lawrenceville, IL, the son of Cecil Leroy and Dessie Rae (Poland) Sager. Leroy attended school in Sumner, IL, and was a graduate of Sumner High School. He was united in marriage to Phyllis Jean Russell on Saturday, October 7, 1961, in Zion United Church of Christ of Marion, and together they shared nearly 57 years of marriage until her death on Friday, May 18, 2018. Leroy’s working career was with General Telephone for 37 years. After his retirement he began working again as a “Car Delivery Person” for Marion Ford and Watermark for 17 years and had driven over 1 million miles during those years. He was a member of Messiah Christian Church of Marion. He also was a member of the Eagles Aerie No. 2457 of Marion, Marion Elks No. 800, The Williamson County Shriners, Scottish Rite Masonic Bodies-Valley of Southern Illinois of Belleville, IL, Moose Lodge and Masonic Fellowship Lodge No. 89 A.F. & A.M. of Marion where he was a 50-year member. He loved camping with his family and pulling his camper all across the country and was proud to be able to say “He had visited all 50 States.” He also enjoyed working jigsaw puzzles, woodworking and teaching his grandchildren how to drive. His family was a very important part of his life and he was always interested in all of their many activities. The many memories created will now be cherished by those he leaves behind. He is survived by three children, Lisa Weaver and her partner, Ron Rogers of Marion, Dennis Sager of Vincennes, IN and Karen Ulrich of Sumner, IL; stepson, Tom McDowell of Carbondale, IL; six grandchildren, Jeremy Weaver and wife, Allison of Marion, Lesley Decker and husband, Ryan of Marion, Emiley Hall and husband, Kevin of Thompsonville, IL, Dave Ulrich and wife, Deon of Sumner, IL, Matthew Sager of Phoenix, AZ and Lesley Beard and husband, Spencer of Bloomington, IN; twelve great grandchildren, Gwendolyn Weaver, Theodore Weaver, Rosalyn Weaver, Alayna Decker, Aryana Decker, Karley Hall, Jaxon Hall, Desiree Ulrich, Destiny Ulrich, Corinne Beard, Vivian Beard and Archer Beard; brother, Donald Sager and wife, Kathy of Olney, IL; sister-in-law, LeAnn Ashley of Paducah, KY; brother-in-law, Ron Russell and wife, Fran of Paducah, KY, other extended family and many friends. He was preceded in death by his parents, wife; stepson, Ronald Lee “Fuzz” McDowell and sister, Josephine Ulrich. Arrangements have been entrusted to Wilson-McReynolds Funeral Home, 900 North Court Street, Marion. The visitation will be on Wednesday, June 23, 2021, from 10:00 a.m. to 12:00 noon at the funeral home. Following the visitation, the funeral service will be at 12:00 noon with Pastor Steve Glenn presiding. The service will begin with Masonic Rites being accorded by members of Masonic Fellowship Lodge No. 89 A.F. & A.M. of Marion. Interment will follow next to his wife in Maplewood Cemetery of Marion, IL. The family requests, for those who prefer, a memorial contribution be given to “Shriner’s Hospital for Children.” Memorial contributions may be mailed in care of Wilson-McReynolds Funeral Home, 900 N. Court Street, Marion, IL, 62959. Memorial envelopes will be available at the funeral home. For additional information please contact the funeral home at 618-993-2131.

The family of Walter Leroy Sager created this Life Tributes page to make it easy to share your memories.

Leroy Sager, age 89, of Marion, IL, passed away peacefully at...

Send flowers to the Sager family.