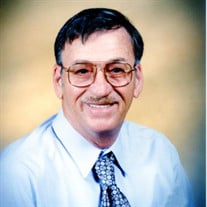 William E. “Bill” Dunbar, age 79, of Marion, IL, passed away peacefully with his family by his side, at 10:35 p.m. on Monday, April 10, 2017, at his home. He was born on Sunday, January 16, 1938, in Johnston City, IL, the son of Roma Rue and Regina D. (Roll) Dunbar. Bill answered the call of this nation by serving in the United States Air Force for over 20 years enlisting in 1955. He and his family were stationed all over the world on bases in Japan, Formosa, England, Turkey, Labrador Canada and Italy. After his period of faithful service he was honorably discharged in May of 1975, with the rank of Technical Sergeant. He was united in marriage to Donna Kay Cain on Tuesday, September 20, 1960, in the Center Baptist Church of Crab Orchard, IL and together they shared nearly 40 years of marriage until her death on Monday, March 27, 2000. After his retirement from the military, he returned and worked in construction, coal mining and in Federal Civil Service. He also served as the Culinary Art Instructor for the Job Corps in Golconda, IL until his retirement. Bill was of the Protestant faith. He also was a member of Heyde-Pillow V.F.W. Post No. 1301 and was former Vice Commander of the Disabled American Veterans Organization both of Marion. In his spare time he enjoyed fishing with his family and friends, regardless if the fish were biting or not. He also enjoyed hunting earlier in his lifetime and camping. The many memories that have been created will now be cherished by those he leaves behind. He is survived by his daughter, Regina Dunbar Hendrickson and her husband Duane of Troy, IL; three sons, William Brent Dunbar and his wife Lisa of Marion, Terry R. Dunbar and his wife Kaoru of Palatine, IL and Barry R. Dunbar of Marion; six grandchildren, Heddie Lynn Dunbar of Palatine, Alexis Ann Dunbar of Marion, Ian Ellis Dunbar of Palatine, Kaitlyn Dawn Dunbar of Marion, Kendall Hendrickson and his wife Ashlee of West Frankfort, IL and Jarrett Hendrickson of Valdosta, GA; two great grandchildren, Remington and Colton Hendrickson both of West Frankfort; two sisters, Velma Regina “Jean” Franklin and her husband Coy and Norma F. Miner all of Marion; sister-in-law, Nancy Smiley and her husband Jim of Marion; three brothers-in-law, Ronald Cain and his wife Sharon of Birch Tree, MO, Richard Cain and his wife Lana of Poordo, IL and Thomas Cain and his wife Becky of Pittsburg, IL, other extended family, and many friends. He was preceded in death by his parents, wife and two sisters, Thelma Holloway and Dorothy Haymaker. Arrangements for William E. “Bill” Dunbar were entrusted to Wilson-McReynolds Funeral Home, 900 N. Court St., Marion, IL. The time of the visitation was from 5:00 p.m. until 8:00 p.m. on Thursday, April 13th at the funeral home. During the time of visitation a “Reflection of Life” DVD Memorial Tribute featuring special people, places and events of Bill’s life was presented to the family and friends. The funeral service was at 11:00 a.m. on Friday, April 14, 2017, at Wilson-McReynolds Funeral Home with Rev. Kevin McNeeley presiding. Comments of memory were presented by Bill’s daughter Regina, Bill’s sons Brent and Terry and brothers-in-law Ronnie and Tom Cain. The prelude and postlude musical selections were recorded piano selections. Special recorded vocal musical selections presented during the service were “In the Garden” by Elvis Presley, “Song for Dad” by Keith Urban, “Wayfaring Stranger” by Johnny Cash and “When I Get Where I’m Going” by Brad Paisley and Dolly Parton. The service concluded with the recorded musical selection “Off We Go Into the Wild Blue Yonder” by the band of the United States Air Force. Pallbearers were Thomas Cain, Jack Whitehead, Richard Cain, Duane Hendrickson, Robert Walsner and Melissa Berendson. Entombment followed in Egyptian Memorial Gardens in Energy, IL. At the mausoleum the musical selection “Amazing Grace” was presented acappella by Duane Hendrickson and Megan Allen. Military honors were accorded at the mausoleum by members of Heyde-Pillow V.F.W. Post No. 1301 and American Legion Post No. 147 both of Marion. Those participating were Commander Larry Largent, Chaplain Ron Ganzer, Color Guard Bob Casey and Bill Rice, National Colors Roger Morris, VFW Post Colors Gene Broombaugh and American Legion Colors Chris Payne. Also participating were members of the United States Air Force Funeral Honors Burial Detail who assisted as pallbearers, folding the flag, presenting the rifle salute and presenting TAPS. During the folding of the flag the recorded musical selection “America the Beautiful was presented. The flag was presented to Bill’s daughter Regina. For those who preferred, memorial contributions were made to either or both “Hospice of Southern Illinois” and or “The American Cancer Society”. For additional information please contact the funeral home by calling 618-993-2131.

The family of William Ellis "Bill" Dunbar created this Life Tributes page to make it easy to share your memories.