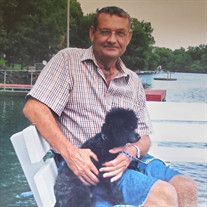 William “Bill” E. Kinsall, age 83, of Marion, IL, passed away peacefully at 10:27 a.m. on Tuesday, October 20, 2020, in Parkway Manor of Marion. He was born on Saturday, June 5, 1937, in Norris City, IL, the son of Ernest Montgomery and Eva (Moran) Kinsall. Bill attended school in Norris City and was a graduate of Norris City High School Class of 1955. He answered the call of this nation in 1958, by serving in the United States Army. After his period of faithful service he was honorably discharged in 1960. Then in 1961, during the time of the Berlin Crisis, he was recalled and faithfully served until he was discharged in 1964. Bill was united in marriage to Suzann Shain on Saturday, September 17, 1960, in Norris City, and together they have shared over 60 years of marriage. His working career was with the Texas Eastern Products Pipeline as a Terminal Operator for 30 plus years until his health forced him to retire. He was a long time member of Aldersgate United Methodist Church of Marion, and enjoyed being a member of the Berean’s Sunday School Class. He also was a member of the Masonic Fellowship Lodge No. 89 A.F. & A.M. of Marion, where he had served as Worshipful Master. After retirement he and Suzann enjoyed traveling and in his younger years he enjoyed hunting and especially fishing. He loved his family and many friends and was always interested in all of their many activities. The memories created will now be cherished by those he leaves behind. He is survived by his wife, Suzann Kinsall of Marion; two sons, Gregory S. Kinsall and his wife, Brenda of Chandler, AZ, and Matthew E. Kinsall and his companion, Dawn Washkevich of Radnor, OH; three grandchildren, Brendan Kambeitz and wife, Nicole of Gilbert, AZ, Elizabeth Kambeitz of Columbus, OH and Arlie Washkevich of Radnor, OH; three great grandchildren, William, Charles and Jacob Kambeitz all of Gilbert, AZ; three sisters, Edie Aud of Norris City, IL, Betty Nalley of McLeansboro, IL and Judy Hatcher and her husband, Gilbert of Grayville, IL; brother, Joe W. Kinsall of Princeton, IN; special friends, Tim and Deanna McAuliffe of Lee’s Summit, MO; Tim & Deanna’s children, Alison Bragee and her husband, Adam of Glen Carbon, IL, Dr. Jamie McAuliffe and her friend, Dr. Connor Thomas of Dallas, TX and Matthew McAuliffe of Lawrence, KS, other extended family and many friends. He was preceded in death by his parents and brother, Charles Kinsall of Marion, and sister, Margaret Gaither of Norris City. Arrangements were entrusted to Wilson-McReynolds Funeral Home, 900 N. Court St., Marion. The visitation was from 11:00 a.m. until 1:00 p.m. on Friday, October 23, 2020, at Aldersgate United Methodist Church, located at 1201 N. Fair St., Marion, IL. Following the visitation the funeral service was at 1:00 p.m. with Pastor Lance Leeds and Rev. Dr. James Slone presiding. The prelude and postlude musical selections were presented by pianist, Judy Hopkins and organist, Sharon Disney. Special vocal musical selections presented during the service were; “Amazing Grace”, “How Great Thou Art” and “Precious Lord Take My Hand” all by Roger Russell with pianist, Judy Hopkins accompanying. Interment followed in Union Ridge Cemetery, located near Herald, IL, in White County. Pallbearers were Carroll Henson, Matthew McAuliffe, Tim McAuliffe, Todd Lawler, David Rafferty and Gilbert Hatcher. For those who preferred, memorial contributions were made to “Aldersgate United Methodist Church Memorial Fund”. Memorial contributions were mailed in care of Wilson-McReynolds Funeral Home, 900 N. Court Street, Marion, IL 62959. Memorial contribution envelopes were available at the church and funeral home. DUE TO HEALTH CONCERNS RELATED TO THE COVID-19 VIRUS AND BY THE SIGNING OF EXECUTIVE ORDER BY THE ILLINOIS GOVERNOR, those attending the visitation or service were REQUIRED to wear a mask and social distance themselves from others. For additional information call the funeral home at 618-993-2131.

The family of William "Bill" Earl Kinsall created this Life Tributes page to make it easy to share your memories.

Send flowers to the Kinsall family.