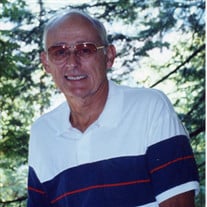 William L. “Bill” Parker, age 82, of Marion, IL passed away peacefully at his home at 11:45 a.m. on Sunday, November 29, 2015, in Parkway Estates of Marion, IL. He was born in Mt. Vernon, IL, on Saturday, September 30, 1933, the son of William G. and Florence (Lough) Parker. Bill grew up in Mt. Vernon, IL and was a graduate of Mt. Vernon High School Class of 1951. He was united in marriage to Jean Kennedy on Wednesday, November 27, 1957, in Mt. Vernon, IL and together they enjoyed nearly fifty-four years of marriage until her death on Wednesday, August 31, 2011. He was a longtime member of First Baptist Church of Marion, IL. Bill answered the call of this nation by serving in the United States Army and after his period of faithful service was honorably discharged. For many years, Bill was owner and operator of Parker Refrigeration in Marion and retired as a plumber and pipefitter from the Howard and Schroeder Group in 1986. Bill was a devoted husband, father and grandfather and liked spending time with his two grandchildren. When time allowed he enjoyed camping and fishing with his family and friends, especially at Little Grassy Lake. The family would like to thank Lyman and Ann Tanner for their friendship and their help and support with Bill down through the years and would like to express a special thanks to his friend Sarah. Bill will be missed by his family and many friends. He is survived by his son and daughter-in-law, Dr. Richard L. and Lana Parker of Mayfield, KY; granddaughter, Malese Parker and grandson, Jase Parker both of Mayfield, KY; sister, Suzie Ragsdale of Durango, CO, other extended family and many friends. He was preceded in death by his parents and his wife, Jean Parker. Arrangements for William L. “Bill” Parker have been entrusted to Wilson-McReynolds Funeral Home, 900 N. Court St., Marion, IL. The graveside committal service will be at 11:00 a.m. on Tuesday, December 8, 2015, in Rose Hill Cemetery of Marion, IL with Dr. Bob Dickerson presiding. Those wishing to attend the graveside service should gather at the cemetery prior to the time of the service. Interment will follow next to his wife, Jean. For those who prefer, memorial contributions may be made to either “The American Lung Association” or “First Baptist Church Building Fund”. Memorial contribution envelopes will be available at the church or may be mailed in care of Wilson-McReynolds Funeral Home, P.O. Box 370, Marion, IL 62959. For additional information please contact the funeral home by calling 618-993-2131.

The family of William L. "Bill" Parker created this Life Tributes page to make it easy to share your memories.