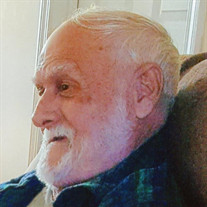 William R. “Dickie” Pappas, age 69, of Creal Springs, IL, passed away peacefully at 7:35 a.m. on Thursday, September 14, 2017, at his home. He was born on Wednesday, April 28, 1948, in Marion, IL the son of Martin Neal and Freda Faye (Bratten) Pappas. William was united in marriage to Nancy Lou Tanner on Saturday, August 10, 1968, at the home of Rev. Kenneth McNeely in Spillertown, IL and together they shared 49 years of marriage. After getting married, he moved to Elgin, IL and began working as a “Master Carpenter” building Ribstone Silos. He later worked for Coleman Flooring of the Chicago-Elgin area, installing tile and carpet. After about 7 years of living in Elgin, he moved his family back to Creal Springs in 1975. He then began working for Johnson Insulation and Siding of Goreville, IL for several years. He later worked for the Classic Coal Company of Pittsburg, IL until the mine closed. He then returned back to the construction field working for several builders of the area including Tom Hanley Construction, Hoffart Construction, and Holmes Construction until his health forced his to retire in 2005. He was of the Baptist faith and a member of the Carpenter’s Local Union No. 638 of Marion. In his spare time after retirement, he enjoyed repairing lawnmowers, buying a scratch off lottery ticket daily, NASCAR, watching his favorite television programs, and spending time with Boots, his devoted dog. William enjoyed spending time with his family, especially his grandchildren and great grandchildren. He was always interested in all of his family’s activities and looked forward to the many times they would be together. The many memories that have been created will now be cherished by those he leaves behind. He is survived by his wife, Nancy L. Pappas of Creal Springs; daughter and son-in-law, Angela and Tony Pierce of Creal Springs; son and daughter-in-law, Anthony and Dana Pappas of Franklin, IN, thirteen grandchildren, six great grandchildren; brother and sister-in-law, Jerry and Barbara Pappas of Creal Springs; four sisters and three brothers-in-law, Jackie and Randell Bundren of Creal Springs, Paula and Keith Taylor of Marion, Sheila Bundren of Creal Springs and Ginger and Paul Wyant of Thompsonville, IL; three brothers-in-law, Randall Tanner and his wife Emma Jean of Creal Springs, Marvin Tanner and his wife Vicki of Marion and Dale Tanner and his wife JoAnn of Creal Springs; two sisters-in-law, Betty Cooper and her husband Eddy of Marion and Sharon McDonald and her husband Leon of Poordo, IL; his devoted loving dog, Boots, other extended family, and many friends. He was preceded in death by his parents; stepfather, Jack Marks; two grandchildren, Hope Pappas and William Pappas; great granddaughter, Brendee Pierce and brother-in-law, Tom Bundren. Arrangements for William R. “Dickie” Pappas were entrusted to Wilson-McReynolds Funeral Home, 900 N. Court St., Marion. The visitation was from 2:00 p.m. until 5:00 p.m. on Sunday, September 17th, at the funeral home. During the time of visitation a “Reflection of Life” DVD Memorial Tribute featuring special people, places and events in William’s life was presented to the family and friends The funeral service was at 11:00 a.m. on Monday, September 18, 2017, with Pastor Matt Troxel presiding. At the conclusion of the service Pastor Troxell read a special poem “PaPa” written by Melanie and Bentley. The prelude and postlude musical selections were recorded piano selections. Special recorded vocal musical selections presented during the service were “Amazing Grace” and “Old Rugged Crross” both by Alan Jackson and “When I Get Where I’m Going” by Brad Paisley and Dolly Parton. Interment followed in McKinney Chapel Cemetery, located near the Lake of Egypt near Goreville, IL. Pallbearers were Garrett Pierce, John Pierce, Tanner Pappas, Hayden Kastansek, Jason Pappas and Sequoyah Jordan. At the graveside several people made comments of memory including William’s wife Nancy telling the “Machete” story. Following the committal service at the cemetery the family and friends gathered at the Creal Springs Assembly of God Church for a meal and continued time of fellowship and support. For more information call the funeral home at 618-993-2131.

The family of William R. "Dickie" Pappas created this Life Tributes page to make it easy to share your memories.