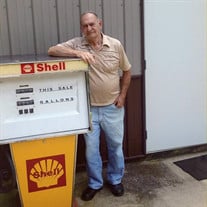 William “Bill” Moake, age 85, of Marion, IL passed away peacefully at 5:15 a.m. December 10, 2019 at the home of his son in Taylorville, IL. Bill was born at home on the family farm near Cypress in Johnson County, IL. the son of Edd and Bessie (Wilson) Moake. Bill was united in marriage to Carolyn J. Hester on Tuesday, February 24, 1953 in Marion, IL and together they shared over 60 years of marriage until her death on Tuesday, March 4, 2014. He last worked for Freeman Coal Co. at Orient #4 mine and retired in 1989. Before going to work for the mines, he owned and operated the Shell Gas Station and, at the same location, the Philips 66 Station on South Court St., in Marion. He was a member of the United Mine Worker of America, loved gardening, watching old western shows and nature shows on television but above all, he loved spending time with his family. The many memories that have been created will now be cherished by those he leaves behind. He is survived by his two sons and daughters-in-law, Bill and Brenda Moake of Taylorville, IL, Eddie and Trish Moake of Marion, IL; four grandchildren, Stephanie Grant of Taylorville, IL, Staci French and husband, Mark of Taylorville, IL, Jennifer Head of Shawneetown, IL, Sarah Kwasniewski and Husband Zach of Marion, IL; six great grandchildren, Brett French, Eric French, Kaitlin Grant, Amaya Peairs, Asher Pierce and Mason Kwasniewski and Sister, Sue Emery of Marion, IL. He was preceded in death by, his parents; wife, Carolyn; four sisters, Lula Harpstrite, Sarah Craig, Alene Mezo, Ruby Manier; five brothers, Robert, Bennie George Moake and two infant brothers, Edward and Albert Moake. Arrangements were entrusted to Wilson-McReynolds Funeral Home, 900 N. Court St., Marion. The visitation was from 10:00 a.m. until 12:00 p.m. on Saturday, December 14, 2019, at the funeral home. Following the time of visitation, the funeral service was at 12:00 p.m. with Rev. John Holst presiding. The prelude and postlude musical selections were recorded piano selections. Special recorded vocal musical selections presented during the service were “The Light House” by The Happy Goodman’s and “Go Rest High On That Mountain” by Vince Gill. Interment followed next to his wife in Cana Cemetery north of Goreville, IL. Pallbearers were Robert Rath, Mark French, Josh Crain, Brett French, Eric French and Zach Kwasniewski. Following the committal service at the cemetery the family and friends gathered at Zion United Church of Christ in Marion, for a meal and continued time of fellowship and support. For those who preferred, memorial contributions were made to the “American Cancer Society” and mailed in care of Wilson-McReynolds Funeral Home, 900 N. Court Street, Marion, IL 62959. Memorial envelopes were available at the funeral home. For additional information call the funeral home at 618-99

The family of William "Bill" Moake created this Life Tributes page to make it easy to share your memories.