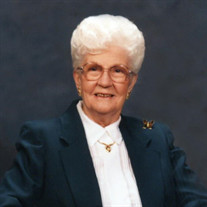 Wilma Newbold, age 94, of rural Villa Ridge, IL, formerly of Ullin and Marion, IL, passed away at 8:00 p.m. Tuesday, September 1, 2015, at the home of her daughter, Carole Starling of rural Villa Ridge, IL. She was born on Monday, September 20, 1920, in Creal Springs, IL the daughter of Ernest and Henrietta (Howerton) Travelstead. Wilma was united in marriage to Kenneth Leon Newbold on Thursday, March 24, 1938, in Benton, KY and they shared over forty-eight years of marriage until his death on Friday, April 18, 1986. She was a member of the Aldersgate United Methodist Church of Marion where she was a faithful and active member for many years until she moved to be near her daughter. While living with her daughter she attended Union Church of Villa Ridge, IL for several years. Wilma never worked outside of the home but always was busy managing her home and seeing to the needs of her family. Her family was a very important part of her life and was always interested and encouraged them in all of their activities, especially those of her grandchildren, great grandchildren and great-great grandchildren. The many memories that were created will now be cherished by those she leaves behind. She is survived by her daughter and son-in-law, Carole and Raymond Starling of rural Villa Ridge, IL; son and daughter-in-law, Garry and Bonnie Newbold of Roanoke, VA; four grandchildren, Scott Newbold and Doug Newbold and his wife Jennifer all of Roanoke, VA, Randy Starling and his wife, Michele of Pulaski, IL and Cindy Meyer and her husband Joe of Thebes, IL, seven great grandchildren and one step great grandson, eight great-great grandchildren and one step great-great grandson; two sisters-in-law, Verna Mae Holmes of Jerseyville, IL and Bernice Boyd of Carbondale, IL, other extended family and many friends. She was preceded in death by her parents; husband; sister, Maude Travelstead who passed away at age 17 and five brothers, Carl, Albert, Alexander and Clarence “Mutt” Travelstead and one as an infant. Arrangements for Wilma Newbold were entrusted to Wilson-McReynolds Funeral Home, 900 N. Court St., Marion, IL. The time of the visitation was from 11:00 a.m. to 1:00 p.m. on Friday, September 4, 2015, at the funeral home. Following the time of visitation the funeral service was at 1:00 p.m. with Rev. Gerald Holmes presiding. The prelude and postlude musical selections were presented by pianist, Lori Creamer. Special vocal musical selections presented during the service were “This World Is Not My Home” and “Precious Lord Take My Hand” both by Lori Creamer who accompanied herself on the piano. Interment followed next to her husband in Egyptian Memorial Gardens Cemetery of Energy, IL. Pallbearers were Ryan Parr, Tanner Starling, Doug Rogers and Randy Starling. Following the committal service at the cemetery the family gathered at Ryan’s Restaurant of Marion for a meal and continued time of fellowship and support. For those who preferred, memorial contributions were made to “Hospice of Southern Illinois” and mailed in care of Wilson-McReynolds Funeral Home, P.O. Box 370, Marion, IL 62959. Memorial envelopes were available at the funeral home. For additional information please contact the funeral home by calling 618-993-2131.

The family of Wilma Newbold created this Life Tributes page to make it easy to share your memories.

Send flowers to the Newbold family.