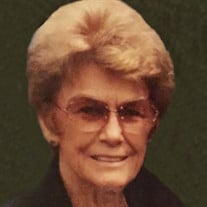 Eve Johns, age 84, of Marion, IL, passed away peacefully at 9:10 a.m. on Saturday, January 16, 2016, in the Frankfort Healthcare and Rehabilitation Center of West Frankfort, IL. She was born on Sunday, May 3, 1931, in Carbondale, IL the daughter of Raymond M. and Eva Jewell (Chamness) Prince. Eve attended school in Carbondale and was a graduate of Carbondale High School Class of 1949. She went on and attended at Southern Illinois University in Carbondale where she met her husband. She was united in marriage to Harold Gene Johns on Monday, January 1, 1951, in Arkansas and together they shared over 33 years of marriage until his death on Saturday, August 11, 1984. Eve was devoted to her husband, family and managing her home. She was always interested in their many different activities and always was encouraging and giving advice when she could. Her life revolved especially around her children and grandchildren. She also loved helping and mentoring other children when she could. Earlier in her lifetime she attended First Baptist Church and recently attended Aldersgate United Methodist Church both of Marion. When time permitted, she also was affiliated with CASA and the H Group as a child advocate and mentor to children. In her spare time she enjoyed going to car shows in the area and region where she often would enter her Jaguar in competition, winning many times. Eve loved being with her family and friends and the many memories that were created will now be cherished by those she leaves behind. She is survived by her son, Mark C. Johns of West Frankfort, IL; daughter and son-in-law, Daredan and Steve Lampley of Marion; six grandchildren, Vanessa Durfee and her husband Kristopher of Paducah, KY, Casey Lampley of West Frankfort, Dane C. Johns and his wife Stacy of West Frankfort and Kaiden Johns, Elair Johns and Dennon Johns all of Marion; seven great grandchildren, Alicia Durfee, Weslyn Durfee and Theo Durfee all of Paducah, KY, Olivia Lampley and Logan Lampley both of West Frankfort and Ezra and Eli Johns both of West Frankfort; three brothers and one sister-in-law, Raymond E. Prince of Lakeland, FL, Edmond and Elaine Prince of Tampa, FL and Edward Prince of Carbondale, IL, a host of nieces and nephews, other extended family and many friends. She was preceded in death by her parents, husband; son, Dane Ray Johns; daughter-in-law, Karen Johns and two brothers, Eddie Prince of Boston, MA and Earl Prince of Honolulu, HI. Arrangements for Eve Johns were entrusted to Wilson-McReynolds Funeral Home, 900 N. Court St., Marion, IL. The visitation was from 5:00 p.m. until 8:00 p.m. on Wednesday, January 20th at the funeral home. During the time of visitation a “Reflection of Life” DVD Memorial Tribute featuring special people, places and events of Eve’s life was presented to the family and friends. The funeral service was at 2:00 p.m. on Thursday, January 21, 2016, with Pastor Jason Ishmael presiding along with Eve’s grandchildren, Vanessa Durfee and Dane C. Johns presenting the eulogy. The prelude and postlude musical selections were recorded piano selections. Special recorded vocal musical selections presented during the service were “The Long and Winding Road” by the Beatles, “You Raise Me Up” by Josh Groban and “The Rose” by Bette Midler. Entombment followed in Rose Hill Cemetery of Marion, IL. Pallbearers were Casey Lampley, Kristopher Durfee, Jake Yordy, Dane C. Johns, Aaron Snidle and Alex Evans. Following the committal service the family gathered at Walt’s Restaurant of Marion, for a meal and continued time of fellowship and support. For those who preferred, memorial contributions were made to “The Night’s Shield” of West Frankfort, IL. Contributions were mailed in care of Wilson-McReynolds Funeral Home, P.O. Box 370, Marion, IL 62959. Memorial envelopes were available at the funeral home. For additional information please contact the funeral home by calling 618-993-2131.

Eve Johns, age 84, of Marion, IL, passed away peacefully at 9:10 a.m. on Saturday, January 16, 2016, in the Frankfort Healthcare and Rehabilitation Center of West Frankfort, IL. She was born on Sunday, May 3, 1931, in Carbondale, IL the daughter... View Obituary & Service Information

The family of Yvonne C. "Eve" Johns created this Life Tributes page to make it easy to share your memories.