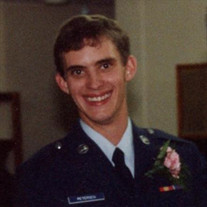 Zachariah “Zach” Leon Petersen, age 43, of West Frankfort, IL, passed away peacefully with his family by his side at 6:40 p.m. on Monday, June 12, 2017, at Good Samaritan Hospital of Mount Vernon, IL. He was born on Tuesday, August 14, 1973, in Glenwood Springs, Colorado the son of Marvin David and Karen Eileen (Waddill) Petersen. Zach attended school in Fort Sumner, New Mexico and was a graduate of Fort Sumner High School Class of 1991. After graduation he answered the call of this nation by enlisting into the United States Air Force serving in Operation Desert Storm. After his period of faithful service he was honorably discharged with the rank of Airman First Class. Zach’s working career had been with Kroger’s and Pepsi both of Marion, IL and most recently was working for General Dynamics of Marion, in the munitions division. He attended and was a member of Life Source Church of West Frankfort. He also was an Eagle Scout and a lifetime member of the National Eagle Scout Association. In his youth he was a member of the Royal Ambassadors of the Baptist church and 4-H. Zach loved his family and the memories that have been created will now be cherished by those he leaves behind. He is survived by his mother, Karen E. Petersen of Fort Sumner, NM; father, Marvin Petersen and his wife Michelle of Paonia, CO; four children, Christian, Madison, Sydney and Alexis Petersen all of Carterville, IL; sister and brother-in-law, Michele and Steve Canton of Arlington, TX; former wife, Dorothy Marks Petersen of Carterville, IL; uncles and aunts, Myron and Sharon Petersen of Farmington, NM, George Waddill of Hallett, OK, Steve and Annitta Waddill of Jacksonville, FL, Buddy and Wendy Petersen of Aledo, TX and Lynn and Dell Sellers of Tarzana, CA, many cousins, other extended family members and many friends. He was preceded in death by his maternal grandparents, George and Jeannie Waddill and his paternal grandparents, Melvin Petersen and Mabel DeBoer. Arrangements for Zachariah “Zach” Leon Petersen have been entrusted to Wilson-McReynolds Funeral Home, 900 N. Court St., Marion, IL. The graveside funeral service will be at 11:30 a.m. on Friday, June 16, 2017, at Mound City National Cemetery, located at the junction of Illinois State Routes No. 37 & No. 51, Mound City, IL, with Pastor Brent Pyles presiding. Those wishing to attend the service should gather at the cemetery prior to 11:30 a.m. Military honors will be accorded at the cemetery by members of the Scott Air Force Base Funeral Honors Detail and the Veteran Members of the Pulaski County, IL area. Interment will follow in the National Cemetery. For those who prefer, memorial contributions may be made to either or both, “Wilson-McReynolds Funeral Home” to be used to assist the family with final expenses or “The Petersen Children Educational Scholarship Fund” to be used for the children’s education and mailed in care of Wilson-McReynolds Funeral Home, 900 N. Court Street, Marion, IL 62959. Memorial envelopes will be available at the cemetery and funeral home. A Celebration of Life service will be held at a later date and will be announced. For additional information or to leave an online condolence please visit our website at www.wilsonmcreynolds.com or call the funeral home at 618-993-2131.

The family of Zachariah "Zach" Leon Petersen created this Life Tributes page to make it easy to share your memories.

Send flowers to the Petersen family.