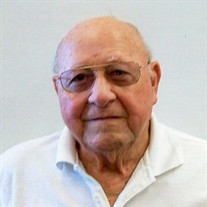 Arlie E. “Gene” Simmons, age 91, of Marion, IL, passed away at 8:47 p.m. on Tuesday, April 9, 2019, in the Community Living Center of the Veterans Administration Hospital of Marion. He was born on Tuesday, August 9, 1927, in Marion, IL, the son of Arlie and Bessie (Askew) Simmons. Gene attended school in Marion and was a graduate of Marion High School. He was united in marriage to Mary Jo Martin on Friday, April 21, 1950, in Marion and together they shared 54 years of marriage until her death in 2004. Gene answered the call of this nation in November of 1951, by enlisting into the United States Marine Corps. After his period of faithful service he was honorably discharged in November of 1953. His working career was diverse throughout his lifetime. He began working as a mechanic for the Ace Music Company of Herrin, IL repairing phonographs, jukeboxes and pinball machines. He later bought and operated Green’s House of Color in Marion for several years. He then decided to change occupations and got his real estate license and owned and operated Southern Illinois Realty in Marion for several years until he bought Wisley Grocery in Marion and operated and became a butcher and was known in town for his quality meats. After several years operating the grocery store he had an opportunity to change careers again and began working for the State of Illinois assisting people of the area with lower income housing, and remained with this position until his retirement. Gene was a member of the Marion Elks Club No. 800 and at the time of his death was the longest continuous serving member of the club. In his spare time when he was younger loved to play golf, and was an avid dancer. He loved his family, especially his grandchildren and enjoyed the many times they all would spend together and was always interested in all of their many activities. The many memories that have been created will now be cherished by those he leaves behind. He is survived by his two sons and one daughter-in-law, Gregg and Daleen Simmons of Sheridan, WY and Doug Simmons of Sarasota, FL; four grandchildren, Kelly Nicole Simmons and her husband R.J. Shartzer of Tacoma, WA, Eric Ryan Simmons of Delaware, Nicholas Alan Simmons of Denver, CO, and Shawn Patrick Simmons of Mountain View, CA; sister, Alice Jewell of Independence, MO, other extended family and many friends. He was preceded in death by his parents, wife; brother, William Edward Simmons and three sisters, Wilma F. Peebles, Edna Marie Cogdill and Eva Lee Greeney. Arrangements have been entrusted to Wilson-McReynolds Funeral Home, 900 N. Court St., Marion. The time of visitation will be from 3:00 p.m. until 5:00 p.m. on Thursday, April 25, 2019, at the funeral home. Following the time of visitation the family has requested all family and friends of Gene to gather for a “Celebration of Life Service” at the Marion Elks Club located at 204 S. Market St in Marion. Interment will be private next to his wife in Rose Hill Cemetery of Marion with Elder Kevin Waldrop presiding. For those who prefer memorial contributions may be made to “Marion Elks Club” and mailed in care of Wilson-McReynolds Funeral Home, 900 N. Court Street, Marion, IL 62959. Memorial envelopes will also be available at the funeral home. For additional information please call the funeral home at 618-993-2131.

The family of Arlie Eugene "Gene" Simmons created this Life Tributes page to make it easy to share your memories.