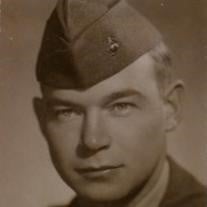 Benjamin Ted Richey, age 81, of Marion, IL passed away at 12:50 p.m. on Friday, December 21, 2012, in Heartland Regional Medical Center of Marion, IL. He was born on Saturday, February 2, 1931, in rural Stonefort, IL of Williamson County, the son of Charles Darwin and Ruby Mae (Roper) Richey. Ted answered the call of this nation by enlisting in the United States Marines during the time of the Korean War from January 20, 1952 until January 20, 1954 and during this time served for six months aboard ship on the USS Chilton PA 38 in the Mediterranean Sea and following his time of faithful service was honorably discharged. Following his time of service, Ted returned to Southern Illinois and for twenty nine years was a prison guard at Menard Correctional Center in Chester, IL. He was a former member of the St. John’s Lutheran Church of Chester, IL, a life member of Marion V.F.W. Heyde-Pillow Post No. 1301, member of Carrier Mills American Legion Post No. 364 and a member of the Fraternal Order of Eagles Aerie No. 3252 of Chester, IL. Ted liked to spend time in the outdoors, hunting, fishing and gardening, raising a variety of vegetables, attending dances in the area and spending time with his many friends. For many years he volunteered at Crab Orchard National Wildlife Refuge and at the Veterans Medical Center in Marion. He is survived by his daughter and son-in-law, Jane A. and Wayne Hawkins of La Vista, NE; two grandchildren, Seth Hawkins and Emma Hawkins both of La Vista, NE; brother, Charles F. “Fred” Richey of Marion; several cousins and other extended family and friends. He was preceded in death by his father, Charles Darwin Richey and his mother and stepfather, Ruby and Jesse Harris. Arrangements for Benjamin Ted Richey were entrusted to the Wilson-McReynolds Funeral Home, 900 N. Court Street, Marion, IL. The time of visitation for family and friends was on Friday, December 28, 2012, from 9:30 a.m. until 11:30 at the funeral home. Following the time of visitation the memorial service was at 11:30 a.m. with Rev. Clark “Butch” Short presiding. The prelude and postlude musical selections were recorded instrumental piano selections. Special recorded vocal musical selections presented during the service were “Somebody Bigger Than You and I” by Elvis Presley, “Abide With Me” by Ella Fitzgerald and “What a Day That Will Be” by Brian Free & Assurance. The service concluded with military honors being accorded by members of the V.F.W. Heyde-Pillow Post No. 1301, American Legion Post No. 147 and the Illinois National Guard Flag Detail, all of Marion, IL. The military service began with the recorded musical selection, “The Marines’ Hymn” as the military entered the chapel. Those members participating were Commander, Larry Largent; Chaplain, Nate Hopkins; Officer of the Day, Pat Campbell; Bugler, Jim Grieme; Color Guard, Bill Rice and Jessie James; National Colors, Ralph DeVasier; Post Colors, Ron Ganzer and Firing Squad, Don Burgrabe, Bill Hampsey, Bill Hatfield, Bill Reynolds and Jerry Swisher. Members of the National Guard Flag Detail participating in the folding of the flag were SPC Sikorski, SPC Etherton and SPC Lukens. During the folding of the flag the recorded musical selection “America the Beautiful” was presented. Presentation of the folded flag to Ted’s daughter, Jane was by SPC Sikorski. After the service the family and friends gathered at Ryan’s Steakhouse for a meal and continued time of fellowship and support. Interment was at a later date in Odd Fellows Cemetery of Marion, IL. In lieu of flowers, memorial contributions were made to either the “Hospice of Southern Illinois” or “American Heart Association”. Memorial contribution envelopes were available at the funeral home or were mailed in care of Wilson-McReynolds Funeral Home, P.O. Box 370, Marion, IL, 62959. For additional information please contact the funeral home by calling 618-993-2131.

Benjamin Ted Richey, age 81, of Marion, IL passed away at 12:50 p.m. on Friday, December 21, 2012, in Heartland Regional Medical Center of Marion, IL. He was born on Saturday, February 2, 1931, in rural Stonefort, IL of Williamson County, the... View Obituary & Service Information

The family of Benjamin T. "Ted" Richey created this Life Tributes page to make it easy to share your memories.