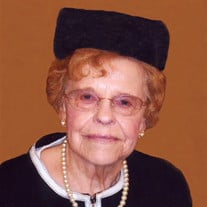 Betty Lou Waters, age 94, of Marion, IL, formerly of Mount Vernon, IL, passed away peacefully at 9:25 p.m. on Tuesday, June 23, 2015, in the Carrier Mills Nursing and Rehabilitation Center of Carrier Mills, IL. She was born in Mount Vernon, IL on Thursday, June 2, 1921, the daughter of Malberry “Dutch” and Luella (Crise) Pigg. Betty was united in marriage to Max Waters on September 14, 1940, in Mount Vernon, IL and together they shared nearly sixty-six years of marriage until his death on July 16, 2006. She never worked outside of the home but always kept busy seeing to the needs of her family and managing her home. She was known as being an excellent seamstress making many clothes for her children and items for the home. In her spare time she enjoyed spending time outside and gardening. Betty was of the Protestant faith and attended Community of Christ Church in Marion with her family. Her family was an important part of her life and enjoyed the many times they spent together. The memories that have been created will now be cherished by those left behind. She is survived by two daughters and sons-in-law, Sue Ella and Gordon Rhine of Marion, IL and Lou Ann and Lloyd Friend of Florence, KY; seven grandchildren, Michael Todd Waters and his wife Rae Ellen, Carrie Ragan and her husband Clint, Keith Rhine and his wife Becky, Collin Rhine and his companion Christina Voss, Jason Dunning and his wife Courtney, Matt Dunning and his wife Casey and Lauren Friend; fourteen great-grandchildren, Max Waters, Reid Waters, Miles Reever, Mackenzie Reever, Mason Reever, Leah Ragan, Braxton Ragan, Karris Rhine, Jordyn Rhine, Tristan Hicken, Easton Rhine, Madalyn Grace Dunning, Peyton Dunning and Cal Dunning, other extended family and many friends. She was preceded in death by her parents, husband; son, James Michael Waters in 1987; daughter, Diane Dunning in 2012; great grandson, Zack Strang in February of 2009 and ten brothers and sisters. Arrangements for Betty Lou Waters were entrusted to Wilson-McReynolds Funeral Home, 900 N. Court St., Marion, IL. The family and friends gathered at 11:00 a.m. on Thursday, June 25, 2015, in the chapel of Mount Vernon Memorial Gardens Cemetery, located west of Mount Vernon, IL, on IL Route 15, with Betty’s son-in-law Elder Gordon Rhine presiding. Comments of memory were presented by many family members and friends. The congregation sang “Amazing Grace” as an acappella selection. Interment followed next to her husband, Max in Mount Vernon Memorial Gardens Cemetery. Following the service the family and friends gathered at Ryan’s Restaurant in Mt. Vernon for a meal and continued time of fellowship and support. For those who preferred, memorial contributions were made to “Community of Christ Church” and mailed in care of Wilson-McReynolds Funeral Home, P.O. Box 370, Marion, IL 62959. Memorial envelopes were available at the funeral home and the cemetery chapel. For additional information please call the funeral home at 618-993-2131.

The family of Betty Lou Waters created this Life Tributes page to make it easy to share your memories.

Send flowers to the Waters family.