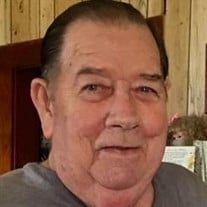 Bill Edward Simmons, age 80, of Creal Springs, IL, passed away with his family by his side at 8:15 p.m. on Saturday, July 13, 2019, in Deaconess Hospital in Evansville, IN. He was born on Monday, October, 3, 1938, in Marion, IL, the son of Oscar Wesley and Madge Marie (Carlson) Simmons. Bill grew up in Creal Springs and was a graduate of Marion High School Class of 1958 and continued his vocational training as a welder. He was of the Protestant faith and last attended God’s Tree of Life Church in Pittsburg, IL. Bill was united in marriage to Maxine Rametta on Sunday, June 5, 1960, in Creal Springs, and together they have shared over 59 years of marriage. Bill first worked at Bracey’s Foods in Marion and later worked in construction and always loved working on the family farm raising cattle and hay. “This is a man that dedicated his life to his wife and his six boys. He was a strong man of his word and stood behind what he believed in. He had a strong hand and a very caring heart. We as kids looked up to him and he showed us the important things in life, respect, love, honesty and the love of family. In his later years he gave us his opinion but never once did he ever get mad for not following his opinion. He let us make our own choices, whether right or wrong and always said you will learn from your mistakes. We learned so much from our Dad and one of them is that anything is possible if you put your mind to it and have the help of God on your side. So today will be my last letter to my Dad to tell him thanks for the life that he has given us. We will love you Dad forever, you will always be in our hearts. Rest in peace until we meet again” He is survived by his wife, Maxine Simmons of Creal Springs; five sons and four daughters-in-law, Bill and Kathy Simmons of West Frankfort, IL, John and Lisa Simmons of Ewing, IL, and Randy and Dianna Simmons, Rick Simmons and Danny and Brandi Simmons all of Creal Springs, twenty nine grandchildren and fifty one great grandchildren and his dear family friend Christy Cook, other extended family members and many friends. He was preceded in death by his parents and one infant son and son Tony Dewayne Simmons. Arrangements for Bill E. Simmons were entrusted to Wilson-McReynolds Funeral Home, 900 N. Court St., Marion. The visitation was from 5:00 p.m. until 7:00 p.m. on Thursday, July 18, 2019, at the funeral home. The funeral service was at 11:00 a.m. Friday, July 19, 2019, with Rev. Dr. Randy Carney presiding. The prelude recorded musical selections presented were “If Heaven Was Needing a Hero” by Jo Dee Messina and “If You Get There Before I Do” by Collin Raye. Special recorded vocal musical selections presented during the service were “Jealous of the Angels” by Donna Taggartand, “One Day at a Time” by Cristy Lane and “He Touched Me” by The Gatlin Brothers. Also during the service vocalist Lois Trask presented the musical selection “The Battle Is Not Yours, It’s the Lords”. The postlude musical selections were recorded piano selections. Interment followed in Ravenswood Cemetery on the family farm near Creal Springs. Pallbearers were Bill Simmons, John Simmons, John Simmons, Randy Simmons, Danny Simmons and Jeremi Simmons. Following the committal service at the cemetery the family and friends gathered at First United Methodist Church of Creal Springs, IL for a meal and continued time of fellowship and support. For those who preferred, memorial contributions were made to “Hospice of Southern Illinois” and may be mailed in care of Wilson-McReynolds Funeral Home, 900 N. Court Street, Marion, IL 62959. For additional information please call the funeral home at 618-993-2131.

The family of Bill Edward Simmons created this Life Tributes page to make it easy to share your memories.

Send flowers to the Simmons family.