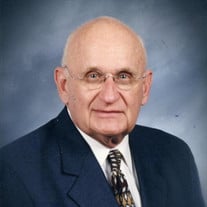 Billy Thomas “Topper” Hurst, age 91, of Marion, IL and Sarasota, FL, passed away peacefully with his family near, at 7:17 p.m. on Tuesday, January 19, 2021, at his home in Marion. He was born on Friday, August 16, 1929, in Elkville, IL, the son of Thomas Jefferson and Maida (Gill) Hurst. Topper was a 1947 graduate of Elkville High School, a graduate of the St. Louis College of Mortuary Science and also attended at the University of Illinois and Southern Illinois University. After graduating from Mortuary School he answered the call of this nation by serving in the United States Army during the time of the Korean War. After his period of faithful service he was honorably discharged with the rank of Sergeant. Returning from his time of military service, Topper provided professional services for several funeral homes throughout Southern Illinois and was honored by the Illinois Funeral Directors Association as a 50 year member. After 37 years of service he retired in 2001, from the State of Illinois having managed the Highway Welcome Centers for the Bureau of Tourism and as an Industrial Development Representative for the Department of Commerce and Community Affairs. He was united in marriage to Marilyn Kay Hamilton, on Saturday, December 26, 1987, in Springfield, IL, and together they have shared over 33 years of marriage. Topper was a member of Scottsboro Baptist Church of Marion. In his spare time he enjoyed listening to music, especially jazz, and was an accomplished pianist by hobby. In his later years, he sought to refine his playing talent under the tutelage of a renowned pianist in Florida performing in recitals. He is survived by his wife, Marilyn K. Hurst of Marion, IL and Sarasota, FL; children, John Hurst of Marion, IL, Gregg Hurst and his wife, Penni of Acworth, GA, Sheryl Bleyer and husband, Tim of Carterville, IL, and Susan O’Neal and husband, LeRoy of Carterville, IL; stepchildren, Tracey Hamilton, Eric Hamilton, Kirk Hamilton and Lonna Donaghue and husband, Frank; grandchildren, Nick (Angelina) O’Neal, Benjamin (Ashley Atterberry) Bleyer, Sarah (Mitch Braddock) Bleyer, Captain Hunter Hurst US Army, Hudson Hurst, Holden Hurst, Caleb (Samantha) Hurst, Hannah Hurst, Leah Hurst and Carson Hurst; step grandchildren, Sean Fitzgerald, Kelly (Chris) Ditterline, Riley Hamilton, Keegan Hamilton, Jack Donaghue, Grace Donaghue and Kara Donaghue; his beloved Havachon companion, Lacy, other extended family and many friends. He was preceded in death by his parents; infant sister, Eunice; sister and brother-in-law, Nina and John Tucker. Arrangements were entrusted to Wilson-McReynolds Funeral Home, 900 North Court Street, Marion. The visitation was on Saturday, January 23, 2021, from 11:00 a.m. to 1:00 p.m. at the funeral home. Following the time of visitation the funeral service was at 1:00 p.m. with Rev. Keith Owens presiding. Comments of memory were presented by Topper’s son, Gregg Hurst. The prelude and postlude musical selections were presented by pianist, Terry Ragain. Special vocal musical selection presented during the service was “The Old Rugged Cross” by Topper’s nephew, Tom Tucker with pianist, Terry Ragain accompanying. The benediction was by presented by Topper’s nephew, Danny Tucker. Interment followed in Rose Hill Cemetery of Marion, IL. Pallbearers were Benjamin Bleyer, Holden Hurst, Carson Hurst, Hudson Hurst, Caleb Hurst and Sean Firzgerald. Military honors were accorded at the graveside by the members of the Heyde-Pillow V.F.W. Post No. 1301 of Marion, and members of the United States Army Funeral Honors Burial Detail at the cemetery. Following the committal service at the cemetery the family and friends gathered at Scottsboro Baptist Church for a meal and continued time of fellowship and support. For those who preferred, memorial contributions were made to “Scottsboro Baptist Church Building Fund” or “Hospice of Southern Illinois”. Memorial contributions were mailed in care of Wilson-McReynolds Funeral Home, 900 N. Court Street, Marion, IL 62959. Memorial envelopes were available at the funeral home.e

The family of Billy Thomas "Topper" Hurst created this Life Tributes page to make it easy to share your memories.