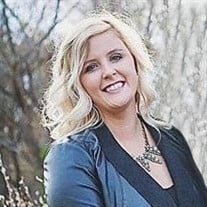 Britney J. Deaton, age 29, of Stonefort, IL, passed away from the result of a single vehicle accident north of Carrier Mills, IL, on US Route 45 South, at 9:24 a.m. on Friday, April 22, 2016. She was born on Saturday, June 21, 1986, in Benton, IL, the daughter of Paul Gene and Brenda Gail (Henderson) Sadler. Britney attended school in Dongola, IL and was a graduate of Dongola High School Class of 2004. She went on with her education by attending Shawnee Community College of Ullin, IL graduating with a degree in Cosmetology in 2006. After graduation she began her working career at a salon in Metropolis, IL and later in Marion, IL for several years. She currently has been working for the last 3 years in Harrisburg, IL at Frannie’s Beauty Salon, a place she truly enjoyed. She is a member of St. Joseph Catholic Church of Marion where she was united in marriage to Chad Wayne Deaton on Saturday, November 7, 2009, and together they have shared 6 ½ years of marriage. Britney was one that “Loved Life” and was always active to the fullest. In her spare time she enjoyed photography, scrapbooking, crafting, decorating, working in her garden and flowers, spending time at the beach and going to movies. She was an avid reader and looked forward to getting together with all her friends of the “Thursday Night Book Club.” Though she always kept active the most important part of her life was her family. She felt so blessed to have her husband, children and family and was looking forward to a wonderful future. The many memories that have been created will now be cherished by those she leaves behind. She is survived by her husband, Chad W. Deaton of Stonefort; son, Daxton Avery Deaton and her daughter, Bella Jewel Deaton both at home; mother and father, Brenda and Paul Sadler of Dongola, IL; mother-in-law and father-in-law, Christine and Fred Deaton of Stonefort; brother and sister-in-law, Tim and Michele Sadler of Rochester, IL; nine nieces and nephews, Alison, Maya and Ella Sadler, Elijah Sadler, Chloee Culkin, Brody Deaton, Logan and Kaden Shaw and Kaylee Hooven; brother-in-law, Christopher Deaton and his wife Shayanna of Stonefort; sister-in-law, Natalie Hooven and her husband David of Stonefort, a host of aunts and uncles, cousins, other extended family and many friends. She was preceded in death by her sister, Tiffany Sadler. Arrangements for Britney J. Deaton were entrusted to Wilson-McReynolds Funeral Home, 900 N. Court St., Marion, IL. The visitation was from 3:00 p.m. until 8:00 p.m. on Monday, April 25th at the funeral home. The prayer service was at 2:30 p.m. on Monday, at the funeral home led by Rev. Monsignor Thomas Flach, V.F. The funeral mass was at 10:00 a.m. on Tuesday, April 26, 2016, at St. Joseph Catholic Church, located at 600 North Russell Street in Marion, with Rev. Monsignor Thomas Flach, V.F. presiding. Reading of scriptures was by Britney’s brother Tim Sadler and Dorothy Machicao. The prelude and postlude musical selections were presented by pianist, Alex Hendrickson. Special musical selections presented as congregation hymns were “Shepherd Me, Oh God”, “We Proclaim Your Death”, “Eye Has Not Seen”, “I Am The Bread of Life”, “Like a Child Rests” and “On Eagle’s Wings” all led by cantor, Patty Heckel and accompanied by pianist, Alex Hendrickson. Interment followed in the Anna City Cemetery of Anna, IL. Pallbearers were Elijah Sadler, Christopher Deaton, Kaden Shaw, Logan Shaw, David Hooven and Bryan King. Following the committal service at the cemetery the family and friends gathered at Harvest Church of Southern Illinois of Anna, IL for a meal and continued time of fellowship. For those who preferred, memorial contributions were made to “Chad Deaton” to be used for the children’s education, and mailed in care of Wilson-McReynolds Funeral Home, P.O. Box 370, Marion, IL 62959. Memorial envelopes were available at the funeral home. For additional information please contact the funeral home by calling 618-993-2131.

The family of Britney Jane Deaton created this Life Tributes page to make it easy to share your memories.

Send flowers to the Deaton family.