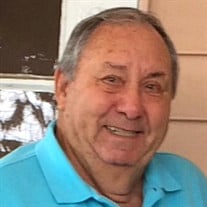 Byron James Lightfeldt, age 81, of Marion, IL, passed away peacefully at 11:59 p.m. on Wednesday, June 28, 2017, in the Integrity Rehab and Nursing Center of Herrin, IL. He was born on Sunday, January 12, 1936, in Riverside, CA, the son of William Carl and Margaret (Lyons) Lightfeldt. Byron grew up in Riverside and attended the schools of the area. Shortly after graduating high school, Byron answered the call of his nation by enlisting into the United States Air Force from October 12, 1954 to October 11, 1962. After his period of faithful service he was honorably discharged with the rank of Airman First Class. Following his time in the Air Force, Byron moved his family back to California. He and his brother started their own construction company in Riverside, CA. After going back to college and earning a Bachelor’s Degree, he worked for Riverside County as a Building and Grounds Supervisor. Byron was united in marriage to Shylana Buchholz on Wednesday, April 1, 1981, in Las Vegas, NV and together have shared over 36 years of marriage. Byron enjoyed spending time with his family, camping, and traveling. He also enjoyed woodworking, oil painting, rock collecting, and sculpting. He had a real passion for gardening and always had beautiful flower beds wherever he lived. He was a life member and supporter of the Palm Springs Air Museum. He loved his family and was always interested in all of their many activities and enjoyed the many gatherings and special times they had together. The many memories that have been created will now be cherished by those he leaves behind. He is survived by his wife, Shylana Lightfeldt of Marion; two daughters, Debbie Houghtaling of Loveland, CO and Linda Martinez of Centralia, IL; two sons, John Lightfeldt of Riverside, CA and Alan Lightfeldt of Apple Valley, CA; step-daughter, Brenda Daly; 11 grandchildren, and 17 great-grandchildren. He was preceded in death by his parents and brother, Donald. Arrangements have been entrusted to Wilson-McReynolds Funeral Home, 900 N. Court St., Marion, IL. The time of the visitation will be from 6:00 p.m. until 8:00 p.m. on Wednesday, July 5th, at the funeral home. Interment will follow at a later date in Riverside National Cemetery in Riverside, CA. For additional information please contact the funeral home by calling 618-993-2131.

The family of Byron James Lighfeldt created this Life Tributes page to make it easy to share your memories.

Send flowers to the Lighfeldt family.