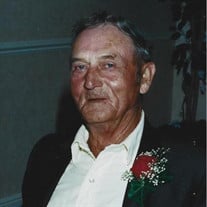 Charles R. Durham, age 92, of rural Marion, IL, passed away peacefully at 12:35 p.m. on Thursday, August 19, 2021, at Shawnee Christian Senior Living Center of Herrin, IL. He was born in rural Williamson County, IL, south of Marion, the son of Loyd L. and Vada (Prichett) Durham. Charles answered the call of this nation by serving in the United States Army during the time of the Korean War. He served overseas in Korea and after his period of faithful service was honorably discharged on October 4, 1952. Shortly after returning home, he was united in marriage to Ruby Mae Maze on Saturday, October 18, 1952, in Piggott, AR, and together they shared over 64 years of marriage until her death on Saturday, December 17, 2016. Charles and Ruby lived for many years in the Mt. Prospect and Addison, IL area where he worked and raised his family. It wasn’t until 1990, when they returned to Williamson County to live on the farm. His working career with the Local 150 Operating Engineers for 25 years was at Contracting & Material Company of Wheeling, IL. This was a large commercial contracting company and he was one of their main mechanics working on the heavy equipment. But Charles also when needed, operated the heavy equipment on the jobs. In 1980, he decided to do something different in his life and bought a Kenworth Cabover Semi and began driving over the road all across the country. His special name for his semi was “The Green Machine” and was known in the trucking world as the “Gentleman Truck Driver.” He was of the Protestant faith. He also was a member of Local 150 Operating Engineers of Countryside, IL, and the Masons In his spare time, he enjoyed riding his Harley, camping, traveling, and going dancing. Often twice a week he and Ruby would be seen at many of the local dances. He loved his family and enjoyed the many times they spent together. He is survived by two sons, Kevin Durham and his wife, Ivona of Sycamore, IL, and Rick Durham of Elburn, IL; daughter, Vickie Lewis of rural Carbondale, IL; three grandchildren, Shauna Lynn Kane and husband, Phil of Sugar Grove, IL, Charles J. Durham of Sycamore, IL and Crystal Mae Durham of Elburn, IL; great granddaughter, Maddison Lynn Kane of Sugar Grove, IL; sister-in-law, Barbara Sigafus of Freeport, IL; two brothers-in-law, Bill Maze of Marion and Harold Maze and his wife, Vennetta of Goreville, IL, a host of nieces and nephews, including special nephew, Dan Vaughn and his wife, Christine of Carterville, IL, other extended family and many friends. He was preceded in death by his parents, wife; son-in-law, Bob Lewis; two sisters, Gussella Vaughn and Mildred Biezad and two brothers, James Durham and Eugene Durham who passed away as an infant in 1919. Arrangements have been entrusted to Wilson-McReynolds Funeral Home, 900 North Court Street, Marion, IL. The visitation will be on Friday, August 27th, from 4:00 p.m. to 7:00 p.m. at the funeral home. The funeral service will be at 11:00 a.m. on Saturday, August 28, 2021, at Wilson-McReynolds Funeral Home with Pastor Donnie Eberheart presiding. Interment will follow next to his wife in Friendship Cemetery located northwest of Goreville, IL. Pallbearers will be Phil Kane, Charles J. Durham, Dallas Maze, Michael Lewis, Dan Vaughn and Shauna Lynn Kane. Military honors will be accorded at the graveside by members of Marion VFW Heyde Pillow Post No. 1301 Funeral Honors Detail and members of the United States Army Funeral Honors Detail. The family requests for those who prefer, memorial contributions be given to “Friendship Cemetery.” Memorial contributions may be mailed in care of Wilson-McReynolds Funeral Home, 900 N. Court Street, Marion, IL, 62959. Memorial envelopes will be available at the funeral home. For additional information call the funeral home at 618-993-2131.

The family of Charles Ray Durham created this Life Tributes page to make it easy to share your memories.

Send flowers to the Durham family.