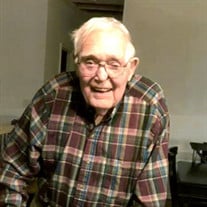 Charles L. Hartwell, age 88, former resident of Creal Springs and Marion, IL, passed away peacefully at 3:40 a.m. on Monday, June 1, 2020, at the home of his daughter Paula Herndon in Godfrey, IL. He was born on Wednesday, December 30, 1931, in Creal Springs, IL, the son of William Virgil “Bill” and Velma Edna (Laney) Hartwell. Charles attended school up thru the 8th grade at the Williford Country School. He then attended high school in Marion, and was a graduate of Marion High School Class of 1950. He answered the call of this nation by enlisting into the United States Navy in February of 1951, and after his period of faithful service was honorably discharged in February of 1955. Charles was united in marriage to Nicolene Paula (Niki) Velloff on Friday, July 18, 1952, in the Calvary Baptist Church of Alton, IL. Together they shared over 67 years of marriage until her death on Tuesday, Nov. 26, 2019. His working career was with LaClede Steel Mill of Alton, IL as a Crane Operator for many years until he retired. He was a former very active member of Calvary Baptist Church of Alton, IL. He was elected a Deacon of the church and was called to spread the word of Jesus to those who were homebound. He often volunteered to preach at the areas care home’s on Sunday mornings and visited homes and hospitals on Wednesday evening bringing God’s good news to them. After moving to the Marion area, he became an active member of Cana Baptist Church of Creal Springs, IL, until his health started to decline. He also was a life time member of the V.F.W. Heyde-Pillow Post No. 1301 of Marion, IL. Charles and Niki loved to shop and collect things and if you every needed something they probably had it. He was always a quiet man, but a man with a strong opinion. He loved to talk with people if he could share God’s love but was not one just to chit-chat. In his spare time, he spent much of his time with his bible opened; reading and taking notes and listening to Christian programs and gospel music on the television. He also just enjoyed watching the “Olds Westerns” on television. He loved his family and enjoyed spending time together and listening about all of their many activities, especially those of his grandchildren and great grandchildren. He would always brag about the time he held his granddaughter, Katelyn all night the first day she came home from the hospital. There have been many memories created that will be cherished by those he leaves behind. He is survived by his daughter and son-in-law, Paula and Joe Herndon of Godfrey, IL; son, Tim Hartwell of Marion; ten grandchildren, Lauren Ferguson (Dustin) of Godfrey, IL, Jacob Ferguson (Michelle) of Beaufort, SC, Katelyn Ferguson (Caty) of Godfrey, IL, Ethan Ferguson of China Lake, CA, Macy Kirtlink of Godfrey, IL, Jesten Herndon (Kelley) of Oklahoma City, OK, Brittany Kohler (Joe) of Steamboat, CO, Jordon Herndon (Jonessa) of Bethalto, IL, Kelsea Herndon of Holiday Shores, IL and Kenlea Herndon (Jake) of Grafton, IL; twelve great grandchildren, Raphael and Leo Lopez both of Godfrey, IL, Haley of Granite City, IL, Jacob Jr. of Mississippi, Mia of Beaufort, SC, Jude of Oklahoma City, OK, Jonathan, Joseph, Jessalyn all of Bethalto, IL and Jonathan, Elijah and Vincent all of Holiday Shores, IL; sister, Jeanette Blumenstock of Creal Springs, IL; two sisters-in-law, Kittianne Velloff of Bartlett, TN and Kathy Velloff of St. Louis, MO, a host of nieces and nephews, other extended family and many friends. He was preceded in death by his parents, wife, sister, Dorothy Lemasters and brother, Billie J. Hartwell Arrangements were entrusted to Wilson-McReynolds Funeral Home, 900 N. Court St., Marion. DUE TO HEALTH CONCERNS RELATED TO THE COVID-19 VIRUS AND BY THE SIGNING OF EXECUTIVE ORDER BY THE ILLINOIS GOVERNOR, it was recommended funeral homes adhere to limit public gatherings within the funeral home to 10 or fewer people. During the time of visitation, some possibly were asked to wait outside until some people left. It was recommended those attending the visitation or service to please wear a mask and social distance themselves from others. The time of visitation was from 11:00 a.m. until 1:00 p.m. on Saturday, June 6, 2020, at the funeral home. During the time of visitation, a “Reflection of Life” DVD Memorial Tribute featuring special people, places and events in Charles’ life was presented to the family and friends. Following the time of visitation, the funeral service was at 1:00 p.m. with Pastor John Howat presiding. The prelude and postlude musical selections were recorded piano selections. Special recorded vocal musical selections presented during the service were, “Amazing Grace” by Hayley Westenra, “One Day at a Time” by Cristy Lane and “Going Home” by Bill & Gloria Gaither. Interment followed next to his wife in Rose Hill Cemetery of Marion, IL. Pallbearers were Charles Hartwell, Mike Hartwell, Gary Groves, Brian Rehbein, Jeremy Rehbein and Joe Herndon. Military honors were accorded at cemetery by members of Heyde-Pillow V.F.W. Post No. 1301 of Marion, and members of the United States Navy Funeral Honors Burial Detail. During the folding of the flag, the instrumental musical selection “America the Beautiful” was presented at the graveside. The folded flag was presented to Charles’ daughter, Paula by a member of the United States Navy Funeral Honors Burial Detail. For additional information call the funeral home at 618-993-2131.

Charles L. Hartwell, age 88, former resident of Creal Springs and Marion, IL, passed away peacefully at 3:40 a.m. on Monday, June 1, 2020, at the home of his daughter Paula Herndon in Godfrey, IL. He was born on Wednesday, December 30, 1931,... View Obituary & Service Information

The family of Charles Lloyd Hartwell created this Life Tributes page to make it easy to share your memories.

Send flowers to the Hartwell family.