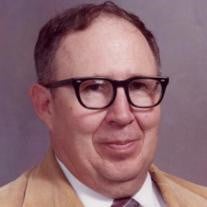 Clayton Russell Eblin, age 84, of rural Creal Springs, IL passed away at 7:17 a.m., on Saturday, March 17, 2012, at Deaconess Gateway Hospital of Newburg, IN. He was born in Utica, IL on Thursday, June 30, 1927, the son of Noble Russell and Vida Mae (Phelps) Eblin. Russell answered the call of this nation during the time of WW II by enlisting into the United States Navy and serving in the Pacific Theater. After his period of faithful service, Russell was honorably discharged and returned home to finish high school and was a graduate of Cisne Illinois High School in 1947. He went on to college attending the University of Illinois, Southern Illinois University receiving his Bachelor’s degree from Eastern Illinois University. He then enlisted in the United States Air Force in 1950, beginning his long military career. During the time of the Korean War he was stationed in Korea as an Air Force Navigator. During one of his leaves back to home, he was united in marriage to Dolores A. Osterman on Monday, December 24, 1951, in Enterprise, IL and together they have shared the last sixty years of marriage. After the end of the Korean War he and his family were stationed at several different military installations. During the time of the Vietnam War, Russell served three different deployments of duty and was awarded the Bronze Star during the Tet Offensive in Vietnam. After his period of faithful service he was honorably discharged and retired from the Air Force in December of 1969, after 22 years of service with the rank of Major. His civilian working career then began in 1969 in business by building and developing the Country-Aire Trailer Park and its other businesses located at Mount Vernon, IL operating the business complex until 1975. It was then he decided to change his career toward education. For the next thirty years he served in education around the country as a teacher, principal and school administrator. Russell was one who always wanted to advance himself and during this time of his life he studied toward receiving his Master’s and Doctorate degrees. He was awarded both degrees from Tri-State Baptist College of Memphis, TN. After a long career in education he decided to retire after thirty years of service in 2006. He was a member of Victory Baptist Church of Carterville, IL. In the past he also was a 32nd Degree Mason and Shriner. In his spare time he found enjoyment in studying astronomy and teaching his family about the different stars, being an avid reader, chess player, watching a western movie and just drinking coffee and visiting with those around him. Though his military and civilian working careers kept him very busy the most important part of his life was his family. He always took interest in their many different activities and treasured the many times they all would gather together. Now those who are left behind will cherish the many memories that have been created. He is survived by his wife, Dolores A. Eblin of rural Creal Springs, IL; son and daughter-in-law, Eric and Teresa Eblin of Marion, IL; daughter and son-in-law, Lisa and Richard Vanegas of Orange County, CA, thirteen grandchildren; special great grandson, Mason Clay Goetsch; sister, Irene Sledge of McLeansboro, IL; two brothers and sisters-in-law, Noble E. and Othela “Kitty” Eblin of Tuscola, IL and Harold L. “Bob” and Anna Eblin of Mt. Vernon, IL, other extended family and many friends. He was preceded in death by his parents; two sons, Mark Allen Eblin on February 3, 2001 and Ruston D. Eblin on November 20, 2001; daughter, Drinda A. Dayton on July 19, 2006 and sister, Louise Fortenberry. Arrangements for Clayton Russell Eblin were entrusted to Wilson-McReynolds Funeral Home, 900 N. Court Street, of Marion, IL. The time of visitation was on Wednesday, March 21st, between the hours of 5:00 p.m. and 8:00 p.m. at the funeral home. During the visitation a “Reflection of Life” DVD Memorial Tribute featuring special people, places and events of Russell’s life was presented to the family and friends. The funeral service was at 11:00 a.m. on Thursday, March 22, 2012, at Wilson-McReynolds Funeral Home with Pastor Glen Aulgur presiding. Reading of the poem “If” was by grandson, Jeffrey Young and comments of memory were by grandson, Brian Dayton and son-in-law, Richard Vanegas. The prelude and postlude musical selections were presented by daughter-in-law, Teresa Eblin on the piano. Special vocal musical selections presented during the service were “Rejoice In the Lord” by granddaughter, Julie Miller with Jed Miller accompanying on the violin and Robin Parris accompanying on the piano; “If You Could See Me Now” by granddaughter, Amanda McPherson with recorded accompaniment and “Pearly White City” as a recorded selection made in 1986; by his daughter, Lisa (Eblin) Vanegas. Interment followed in Rose Hill Cemetery of Marion, IL. Pallbearers at the funeral home were Jed Miller, Jeff Young, Derek Roby, Chad McPherson, Brian Dayton and Heather Goetsch. Pallbearers who served at the cemetery were members of the United States Air Force. Military honors were accorded at the graveside by members of the United States Air Force. The folding and presentation of the flag was by granddaughter, Heather Goetsch and grandson, Brian Dayton. After the committal service at the cemetery the family and friends gathered at Victory Baptist Church of Carterville, IL for a meal and continued time of fellowship and support. For those who preferred, memorial contributions were made to Victory Baptist Church in Carterville IL. Memorial contribution envelopes were available at the funeral home or were mailed in care of Wilson-McReynolds Funeral Home, P.O. Box 370, Marion, IL 62959. For additional information please call the funeral home at 618-993-2131.

The family of Clayton Russell Eblin created this Life Tributes page to make it easy to share your memories.

Send flowers to the Eblin family.