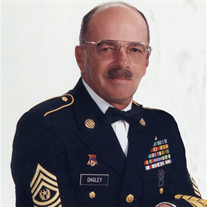 CSM Joe Patrick Dagley, age 66, of Marion, IL, passed away with his family by his side at 6:48 p.m., on Sunday, September 28, 2014, in Heartland Regional Medical Center of Marion, IL. He was born on Monday, March 29, 1948, in Eldorado, IL the son of Joe Bailey and Virginia Elizabeth (Hughes) Dagley. He was known locally to many as Pat and professionally as Joe. Pat attended school in Norris City and was a graduate of Norris City High School in 1966. He answered the call of the nation by enlisting into the United States Navy. During his boot camp training he was selected by his peers as the most outstanding and was given the “Honor Man” award. He was stationed on the USS Coral Sea and served two tours of duty in Vietnam. After eleven years of service he was honorably discharged in 1975, with the rank of Second Class Petty Officer. For the next twenty-two years, while his children were in school, he served in the United States Army National Guard, and worked in the civilian sector. He was employed with the AMAX Coal Company located east of Marion until the mine closed in 1997. At that time, Pat was offered a position with the Illinois Army National Guard in Springfield, IL at Camp Lincoln where he was assigned to the Counter Drug Program. He served in that position for three years and was later transferred to the Illinois Army National Guard Armory in Marion, IL in 2000. He remained in that position until he decided to retire in 2007. After his period of faithful service he was honorably discharged with the rank of Command Sergeant Major (CSM). He was united in marriage to Carol E. Gowdy, on Thursday, December 22, 1966, in the Union Ridge Presbyterian Church in White County, IL, near New Haven, and together they have shared nearly forty-eight years of marriage. He is a member of Aldersgate United Methodist Church of Marion, IL. Some of his other affiliations include the Carrier Mills, IL Masonic Lodge, lifetime member of Heyde-Pillow V.F.W. Post No. 1301 of Marion, IL, and the Harrisburg IL Hunters Club where he attended every Tuesday. Pat loved nature and being outdoors. He enjoyed fishing; especially fly fishing, traveling and spending the winters at his home in south Florida. He loved his family and always took interest in their many activities. The many memories that have been created will now be treasured by those left behind. He is survived by his wife, Carol E. Dagley of Marion, IL; two daughters and sons-in-law, Melissa and Brad Rigsby of Haubstadt, IN and Kristina and Sean Zehr of Normal, IL; three grandchildren, Patrick Rigsby and Lexi Rigsby both of Haubstadt, IN and Elizabeth Zehr of Normal, IL; brother and sister-in-law, Keith and Nancy Dagley of Norris City, IL; sister-in-law, Claudia Deuel and her husband, Rodney of Carrier Mills, IL, nieces, nephews, other extended family and many friends. He was preceded in death by his parents. Arrangements for CSM Joe Patrick Dagley have been entrusted to Wilson-McReynolds Funeral Home, 900 N. Court St., Marion, IL. The time of visitation will be on Wednesday, October 1, 2014, from 5:00 p.m. until 8:00 p.m. at the funeral home. Visitation will then resume at 10:00 a.m. on Thursday, October 2nd, at Aldersgate United Methodist Church, located at 1201 North Fair Street, Marion. Following the time of visitation the funeral service will be at 1:00 p.m. with Rev. Dr. Tim Ozment presiding. Interment will follow in Union Ridge Cemetery located in White County near New Haven, IL. Pat will be escorted to the cemetery by the Patriot Guard Riders. Military honors will be accorded at the graveside by members of Illinois Army National Guard Funeral Honors Detail. For those who prefer, memorial gifts may be made to either “Aldersgate United Methodist Church Building Fund” or “Hospice of Southern Illinois”. Memorial contribution envelopes will be available at the funeral home and the church or may be mailed in care of Wilson-McReynolds Funeral Home, P.O. Box 370, Marion, IL 62959. For additional information please contact the funeral home by calling 618-993-2131.

The family of CSM Joe Patrick Dagley created this Life Tributes page to make it easy to share your memories.

Send flowers to the Dagley family.